Plumerville is a city in Conway County, Arkansas, United States. The population was 826 at the 2010 census.

There were 345 households, out of which 33.6% had children under the age of 18 living with them, 47.2% were married couples living together, 19.1% had a female householder with no husband present, and 30.7% were non-families. 27.2% of all households were made up of individuals, and 10.7% had someone living alone who was 65 years of age or older. The average household size was 2.48 and the average family size was 2.98.

Plumerville began as Plumer's Station, a stage station on the Fort Smith to Memphis branch of the Butterfield Overland Mail.

The old downtown area of Plumerville was completely destroyed by fire in 1987. The old town jail or "calaboose" (built circa 1880) still stands intact on Springfield Street near the new city hall.

Plumerville's history is quickly explored in The Encyclopedia of Arkansas History & Culture[1] [2]. 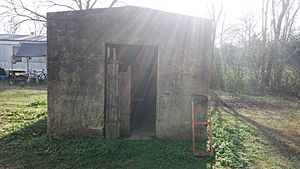 The town Jail of Plumerville, Arkansas. Built around 1880

John Middleton Clayton (October 13, 1840 – January 29, 1889) was a Republican carpetbagger to Arkansas, originally from Pennsylvania. He was also the younger brother of Powell Clayton, a Governor of Arkansas.

He is best remembered today from his mysterious assassination in 1889. In 1888, he ran for the office of Arkansas's 2nd congressional district in the United States House of Representatives, going up against incumbent Democrat Clifton R. Breckinridge. The election became one of the most fraudulent in Arkansas' history. Clayton lost the election by a margin of 846 votes of over 34,000 votes cast. However, in one case in Conway County, four masked, armed white men stormed into a predominantly black voting precinct and, at gunpoint, stole the ballot box that contained a large majority of votes for Clayton. Losing under such circumstances, Clayton decided to contest the election and went to Plumerville to start an investigation on the matter. On the evening of January 29, 1889, an unknown assailant shot through the window to the room he was staying in at a local boarding house (still standing at 101 N. Springfield Street) and killed him instantly. He was later declared the winner of the election and Breckinridge was unseated and the seat declared vacant. Clayton's assassin was never found. Breckinridge was not found guilty in any wrongdoing in the rigged election or in Clayton's assassination and was elected to fill the vacant seat in 1890.

It is within the South Conway County School District. It operates Morrilton High School.

In 1980 the East Side, Morrilton, and Plumerville School districts consolidated to form the new South Conway County district.

All content from Kiddle encyclopedia articles (including the article images and facts) can be freely used under Attribution-ShareAlike license, unless stated otherwise. Cite this article:
Plumerville, Arkansas Facts for Kids. Kiddle Encyclopedia.