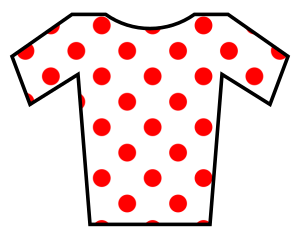 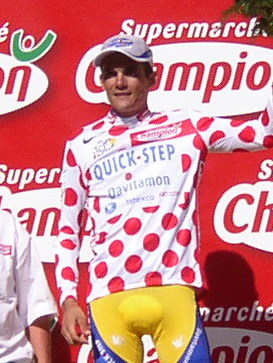 The polka dot jersey is the special cycling jersey given to the "King of the Mountains" in the Tour de France. The jersey is white with red spots, called polka dots. There is also space for the logo of the cycling team the winner belongs to.

The King of the Mountains is the rider who has collected the most points in the hill-climbing sections of each stage. Points are given to the first riders to reach the top. More points are given for difficult climbs. Difficulty is judged by the length of the climb and the average steepness of the climb.

The King of the Mountains competition at the Tour de France was started in 1933. The polka dot jersey for the winner was introduced in 1975.

Richard Virenque has won the jersey seven times, more than any other cyclist. In 2014 the winner was Rafał Majka. In 2015 an Eritrean rider, Daniel Teklehaimanot, became the first African who won a Polka dot jersey.

All content from Kiddle encyclopedia articles (including the article images and facts) can be freely used under Attribution-ShareAlike license, unless stated otherwise. Cite this article:
Polka dot jersey Facts for Kids. Kiddle Encyclopedia.