Pont Farcy has its origins in Gallo-Roman times: the town has always been an important crossing place due to its bridge over the River Vire. It was also passed through by the Dukes of Normandy. Before the 20th century there is little evidence to suggest the village held much more than peasants; it probably wasn't considered a particularly important spot, as Saint-Sever-Calvados was. During the 20th century the village became a thriving river port, and a tow path starts here and reaches as far as the Normandy landing beaches. The village originally had a railway bridge but this was blown up by the Nazis upon their retreat from the village in 1944. Pont-Farcy was liberated by the Americans on 2 August 1944.

In the latter half of the 20th century the population has dropped from nearly 1,000 to about 500 (although in recent years it has picked up again). This has a lot to do with the Autoroute which passes just north of the village. 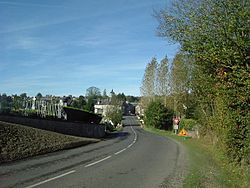 The D52 Road in Calvados, France approaching Pont-Farcy, the cemetery is to the left

All content from Kiddle encyclopedia articles (including the article images and facts) can be freely used under Attribution-ShareAlike license, unless stated otherwise. Cite this article:
Pont-Farcy Facts for Kids. Kiddle Encyclopedia.