Poplarville is a city in Pearl River County, Mississippi, United States. As of the 2010 census, the city population was 2,894. It is the county seat of Pearl River County. It hosts an annual Blueberry Jubilee, which includes rides, craft vendors and rodeos.

Poplarville was named for Poplar Jim Smith, the original owner of the town site.

On the night of April 24, 1959, Mack Charles Parker, an African-American, was abducted from the Pearl River County jail in Poplarville by a mob and and killed. His body was found in the Pearl River 10 days later. The FBI investigated and even obtained confessions from some of the eight suspects. However, the county prosecutor refused to present evidence to a state grand jury and a federal grand jury refused to indict. The case focused national attention on the persistence of lynching in the South and helped accelerate the American Civil Rights Movement.

On August 29, 2005, Hurricane Katrina inflicted heavy damage on the small town. The storm's most powerful, unofficially recorded gust of wind was reported at Pearl River Community College, at 135 mph (217 km/h). On September 2, 2005, the 1st Battalion, 134th Field Artillery (Ohio Army National Guard) arrived at the National Guard armory in Poplarville to assist the community and Pearl River County in recovery efforts in the wake of Hurricane Katrina. Initial efforts were the security of banks, pharmacies and gas stations as well as initial responses to rural emergencies. The unit stayed for three weeks ultimately checking on every family and structure in the county. On September 5, 2005, Poplarville played host to a visit by George W. Bush, Laura Bush, and Governor Haley Barbour to Pearl River Community College in the aftermath of Hurricane Katrina.

On March 25, 2014 citizens voted to allow for beer and wine sales. The final vote count was 361 votes for the measure and 149 against. 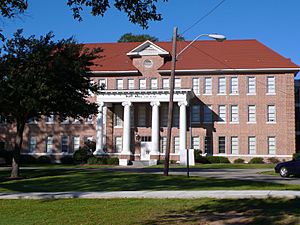 The City of Poplarville is served by the Poplarville School District and is home to Pearl River Community College.

All content from Kiddle encyclopedia articles (including the article images and facts) can be freely used under Attribution-ShareAlike license, unless stated otherwise. Cite this article:
Poplarville, Mississippi Facts for Kids. Kiddle Encyclopedia.