Porongurup National Park is a national park in the Great Southern region of Western Australia, 360 km southeast of Perth and 40 km from Albany.

It protects the Porongurup Range, an extremely ancient and largely levelled mountain range formed in the Precambrian over 1200 million years ago. The present range is no more than fifteen km (10 miles) from east to west and consists of granite peaks levelled into domes. The highest point in the Porongurup Range is Devils Slide at 670 metres (2,200 ft) whilst there are several other peaks above 600 metres (1,970 ft), which is about 400 metres above the surrounding plain. Indeed, for much of the Cretaceous and Paleogene the Porongurup Range was an island surrounded by the sea, with the Stirling Range forming the southern coastline.

It is believed that the Porongurup Range is a remnant of the Precambrian collision that joined Australia and Antarctica until they separated in the Paleocene. There remain major granite intrusions in what is left of what must once have been a large mountain range.

Although Aboriginal tribes had lived in the plains around the Porongurup Range for tens of thousands of years before European settlement, it is believed that they never or very rarely moved above the plains, largely because of the often inhospitable weather and the absence of useful resources in the forests of the region or on the often bare peaks.

The Porongurup Range was first sighted by Europeans passing near Albany in 1802 but farming in the surrounding districts did not start until around 1859 when vegetables were first grown on the southern slopes of the range. The giant karri and jarrah trees of the range were first harvested for timber in the 1880s and timber leases did not begin to be withdrawn until 1925 and the National Park was not gazetted officially until 1971 with an area of 1,157 ha. This has now been increased to 2,511 ha.

In 1978, Cyclone Alby felled many trees within the National Park (it was an unusual depression that produced very little rainfall after moving south of the Tropic of Capricorn). 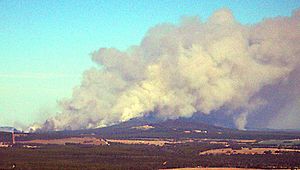 On 11 February 2007, a fire began on private property near the north-west corner of the park. It quickly spread into the native vegetation and raced up the steep slopes within hours. Volunteer fire crews and Department's firefighters battled the fast-moving blaze and managed to contain it overnight after it had burnt around 50% of the park. The fire broke containment lines on Monday afternoon (12 February) and spread further through the park and into private property to the north-east. Fire crews, including aerial support from six water bomber planes, continued the battle to contain the blaze and by Tuesday morning it was again under control though still burning freely within the containment zone. Water bombers paid special attention to tourist facilities and special habitats, including an area where endangered noisy scrub birds had been released. By Wednesday morning (14 February) the fire had burnt through around 95% of the national park. 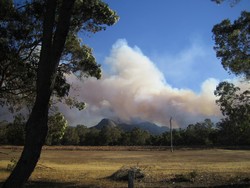 As many of the trees and vegetation are native to the region, it is expected that the park will, to a large extent, recover in the months after the fire. By early April, Kingia australis plants were re-shooting and flowering abundantly in heavily burnt areas but the legacy of the fire will be felt for some time to come. Local populations of kangaroos and other wildlife were injured and local residents assisted in their care and recovery where possible. There has not been such a devastating fire in the region since the 1960s.

The plains surrounding the Porongurup Range have an annual rainfall of around 800 mm (32 inches) to the south and around 600 mm (24 inches) on the northern side. Most of this rain falls between April and October: although light showers are common in the summer months, the average rainfall between November and March totals only around 110 mm (4.5 inches) in the southern plains and less than 75 mm (3 inches) to the north. Summer temperatures on the plains average a very warm 26 °C (79 °F) in the daytime and decline to around 18 °C (64 °F) at night. In winter, although it can be rainy, temperatures average a very pleasant 16 °C (60 °F) during the day and a cool 8 °C (46 °F) in the morning. 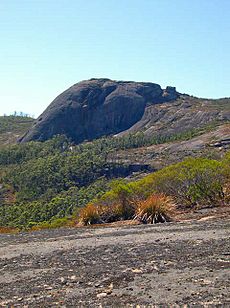 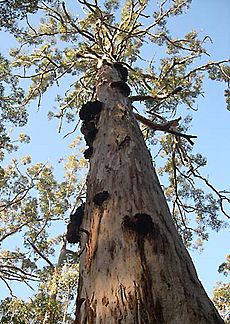 Temperatures on the peaks are around 3 °C (5 °F) lower than on the plains, and snow has occasionally fallen on the ranges (heavily in October 1992 and June 1956).

This high rainfall explains the survival of karri forests quite a distance from their main stronghold between Manjimup and Walpole. The karri forests are one of the major attractions of the Porongurups and occur chiefly on the upper slopes of the range on deep red soils known as "karri loam". On lateritic soils downslope, the predominant type of vegetation is a mixed forest of jarrah and marri, whilst on the highly exposed and frequently waterlogged summits, an open mossy herbland prevails.

Though not nearly as rich biologically as the more northerly Stirling Range, there exist ten endemic species of plant in the Porongurup Range, the best known being the mountain villarsia (Villarsia caltbifolia).

The park includes a number of significant tourist features and walk trails.

All content from Kiddle encyclopedia articles (including the article images and facts) can be freely used under Attribution-ShareAlike license, unless stated otherwise. Cite this article:
Porongurup National Park Facts for Kids. Kiddle Encyclopedia.