Kids Encyclopedia Facts
(Redirected from Port Tampa, Tampa, Florida)
This page is about the neighborhood located on the southwest side of Tampa, Florida. For the city's main port near downtown, see Port Tampa Bay.

Port Tampa is a neighborhood in the southwesternmost portion within the city limits of Tampa, Florida, on the western end of the Interbay Peninsula. Within this neighborhood is Picnic Island Park as well as several public schools including Westshore Elementary, Monroe Middle School, and Robinson High School.

It is sometimes confused with Port Tampa Bay (formerly the Port of Tampa), Tampa's larger port area near downtown on the northern end of Hillsborough Bay. 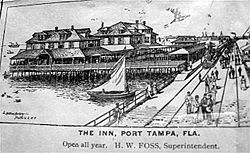 The town of Port Tampa City was established in 1885 at the end of Henry B. Plant's railroad line. The shallow draft of Tampa Bay made Tampa's main port inaccessible for the larger ships of the day, so Plant built a new port several miles away. To help bring visitors and residents to this new development, Plant's built the St. Elmo Inn and Port Tampa Inn at the end of his rail line. The Port Tampa Inn was larger and had the distinction of being constructed directly on the bay on stilts.

Port Tampa became less important when several dredging projects made the Port of Tampa accessible to all shipping. The port is still in use, however, and is the main entry point for fuel for both Tampa International Airport and MacDill Air Force Base. 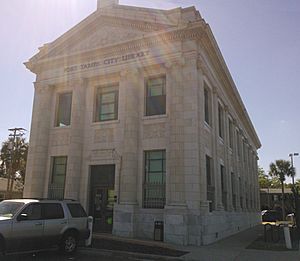 Though the city of Port Tampa was annexed by the City of Tampa in 1961, community members still recognize the neighborhood's heritage. A centennial celebration was held in 1993, complete with home tours, and a large block party in the Spanish–American War Memorial Park at the corner of Interbay Blvd. and Westshore Blvd.

A large neoclassical style building with marble base and glazed terracotta tile above, formerly used as a bank, was saved from demolition through a community effort spearheaded by the Port Tampa City Woman's Club and the Civic Association of Port Tampa. The Port Tampa City Women's Club had run the library from 1951–1961. The renovated building, the former Commerce Bank Building, was converted into the Port Tampa City Library in 1998. Its second floor houses Tampa's Maritime Reading Room, with its artifacts,books and coastal maps. The library is now run by the county.

The official boundaries of the city of Port Tampa were lands west of Manhattan Avenue to Tampa Bay and everything south of the old east-west railroad track north of McCoy St. Locals sometimes refer to it as anything "south of Gandy" although this is not exactly true, as there are several other distinct neighborhoods across the Tampa peninsula besides Port Tampa.

Hulk Hogan grew up in Port Tampa and attended Robinson High School when he was still known as Terry Bollea.

Tommy Gomez was a heavyweight boxer from Port Tampa City. He fought several well-known heavyweights like Ezzard Charles and Jersey Joe Walcott in venues such as Madison Square Garden in New York City.

Javier Arenas graduated from Robinson High School. He is a cornerback with the Arizona Cardinals of the National Football League.

All content from Kiddle encyclopedia articles (including the article images and facts) can be freely used under Attribution-ShareAlike license, unless stated otherwise. Cite this article:
Port Tampa (neighborhood) Facts for Kids. Kiddle Encyclopedia.