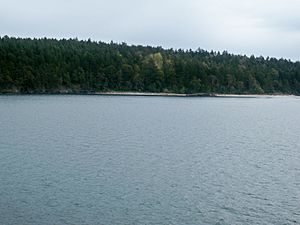 Portland Island from the west 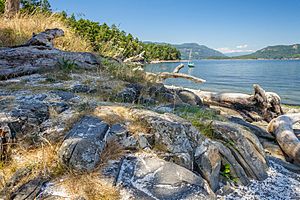 Portland Island is an island of the Southern Gulf Islands of the South Coast of British Columbia, Canada. It is located in the Salish Sea west of Moresby Island and off the south tip of Saltspring Island, adjacent to the main BC Ferries route just offshore from the terminal at Swartz Bay at the tip of the Saanich Peninsula. It was named after HMS Portland, the flagship of Rear-Admiral Fairfax Moresby, Commander in Chief of the Pacific Station 1850–1853.

Portland Island is separated from North Pender Island to the northeast by Swanson Passage, Moresby Island by Moresby Passage to the east, Piers Island and Coal Island to the southeast by Shute Passage, and Saltspring Island to the west and north by Satellite Channel.

Portland Island is accessible by private watercraft or marine charter only. There are dinghy docks available at Princess Bay and Royal Cove, and a stern-tie ring at Princess Bay. Paddlers can land at the beach accesses at Princess Bay, Arbutus Point and Shell Beach.

A 6.5-kilometre (4 mi) loop trail follows the shoreline of Portland Island, and is accessible from any of the three camping areas (Shell Beach, Princess Bay, Arbutus Point). This hike requires approximately three hours to complete, but can be shortened to about one hour by taking one of the cross-island forest trails.

All content from Kiddle encyclopedia articles (including the article images and facts) can be freely used under Attribution-ShareAlike license, unless stated otherwise. Cite this article:
Portland Island (British Columbia) Facts for Kids. Kiddle Encyclopedia.