Posidonia australis is a species of seagrass that occurs in the southern waters of Australia. It is sometimes referred to as fibreball weed. It forms large meadows important to environmental conservation. Balls of decomposing detritus from the foliage are found along nearby shore-lines. 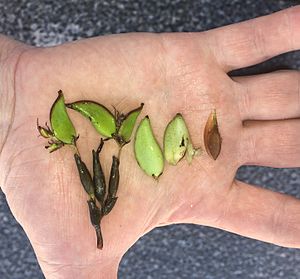 P. australis is a flowering plant occurring in dense meadows, or along channels, in white sand. It is found at depths from 1 to 15 metres. Subsurface rhizomes and roots provide stability in the sands it occupies. Erect rhizomes and leaves reduce the accumulation of silt.

The leaves are ribbon-like and 11–20 mm wide. They are bright green, perhaps becoming browned with age. The terminus of the leaf is rounded or absent through damage. They arranged in groups with older leaves on the outside, longer and differing in form from the younger leaves they surround.

The species is monoecious. The flowers appear on small spikes on leafless stems, two bracts on each spike. The plant pollinates by hydrophily, by dispersing in the water.

P. australis reproduction usually occurs through sexual or asexual methods but, under extreme conditions, by pseudovivipary. 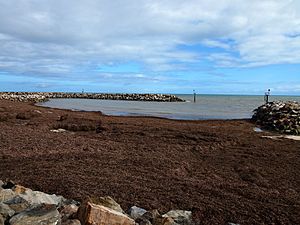 This species is found in waters around the southern coast of Australia. In Western Australia is occurs in the Shark Bay region, around islands of the Houtman Abrolhos, and southward along the coast of the Swan Coastal Plain. The species is recorded at the edge of the Esperance Plains, the Archipelago of the Recherche, at the southern coast of the southwest region. The range extends to the east to coastal areas of New South Wales, South Australia, Tasmania, and Victoria. A sign of a nearby occurrence of Posidonia is the presence of masses of decomposing leaves on beaches, forming fibrous balls.

This species is a member of the family Posidoniaceae, one of eight occurring in Australia. The ninth member, Posidonia oceanica, is found in the Mediterranean sea. The genus name for this species, Posidonia, is given for the god of the seas Poseidon, and australis refers to the southern distribution. The species was first described by Joseph Hooker in Flora Tasmaniae.

All content from Kiddle encyclopedia articles (including the article images and facts) can be freely used under Attribution-ShareAlike license, unless stated otherwise. Cite this article:
Posidonia australis Facts for Kids. Kiddle Encyclopedia.