Primanti Brothers (/prɪˈmænti/, local /pər-/) is a chain of sandwich shops in the eastern United States, founded in and most closely associated with, as a cultural icon of, Pittsburgh. Founded in 1933, the chain is known for its signature sandwiches of grilled meat, melted cheese, an oil & vinegar-based coleslaw, tomato slices, and French fries between two thick slices of Italian bread.

During the 2007 James Beard Foundation Awards, Primanti's was named as one of "America's Classic" restaurants.

The original shop is located at 46 18th Street in Pittsburgh's Strip District, a busy area along the Allegheny River that was once filled with factories, warehouses, and produce yards. According to the restaurant, Joe Primanti, born in suburban Wilmerding, Pennsylvania, invented the sandwich during the Great Depression. His brothers, Dick and Stanley, later joined him. The Primantis opened their diner at Smallman Street and 18th Street in the Strip District and served the late-night and early-morning workers who were unloading fish, fruits, and vegetables.

The tradition of the signature sandwiches (typically ordered by number based on a "menu" written on a huge chalkboard behind the counter) was to combine the sandwich and side of fries, held (grilled) together with eggs as a binding unit, straight from the grill into a hoagie bun. The sandwich was then wrapped in a sheet of newspaper and handed to the customer. This was done so the customer could then go back to his (hopefully loaded) truck and drive back to his shop while managing to eat the sandwich while driving without getting it all over his lap.

It has also been a tradition for the late night crowd to go to Primanti's in the Strip District after the bars have closed, due to their hours of operation (at one time they were one of the few establishments open after 2 a.m.). There were several rows of bingo tables with benches and those "eating in" just crowded into any available space. It was comical to see the bar crowd (typically college students) interacting with the working crowd (typically truck drivers and dock workers from the trains). The unifying factor was usually local sports and Iron City, Duquesne or Rolling Rock 12 oz bottles.

With the passing of Stanley Primanti in the early-1970s and John in 1974, Dick decided to sell the business to Jim Patrinos in 1975. Today there are 16 Pittsburgh locations, including at the city's major sports venues PNC Park, Heinz Field, and the PPG Paints Arena, as well as several other locations throughout the eastern United States.

The chain expressed its support for the Pittsburgh Penguins during their back-to-back Stanley Cup championships in their 2015–16 and 2016–17 seasons, releasing two limited-time sandwiches in their honor. In 2016, it released a limited-time sandwich honoring the team's third line of Carl Hagelin, Nick Bonino and Phil Kessel, named the "HBK Sandwich". Late into the next season, the chain then introduced a sandwich called the "Canadian Pitts-Burger", honoring goaltender Marc-André Fleury during his eventually final season with the Penguins. The sandwich featured Canadian bacon and was also available at all Primanti Brothers locations for a limited time. 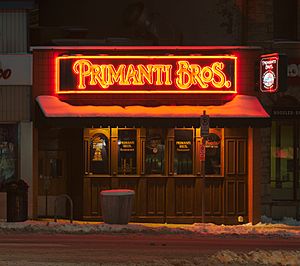 Primanti Brothers locations are found throughout Pennsylvania, particularly in and around Pittsburgh. In addition to other Pennsylvania locations, restaurants have been established in South Florida, Ohio, West Virginia, Maryland, Michigan and Indiana.

All content from Kiddle encyclopedia articles (including the article images and facts) can be freely used under Attribution-ShareAlike license, unless stated otherwise. Cite this article:
Primanti Brothers Facts for Kids. Kiddle Encyclopedia.