Prineville is a city in and the seat of Crook County, Oregon, United States. It was named for the first merchant located in the present location, Barney Prine. The population was 9,253 at the 2010 census.

Prineville was founded in 1877 when Monroe Hodges filed the original plat for the city. The post office for the community had been established with the name of Prine on April 13, 1871, but changed to Prineville on December 23, 1872. The city was incorporated by the Oregon Legislative Assembly on October 23, 1880, and obtained its first high school in 1902.

Long the major town in central Oregon, Prineville was snubbed in 1911 when the railroad tycoons James J. Hill and Edward H. Harriman bypassed the city as they laid track south from The Dalles. In a period when the presence of a railroad meant the difference between prosperity and the eventual fate as a ghost town, in a 1917 election, Prineville residents voted 355 to 1 to build their own railway, and raised the money to connect their town to the main line 19 miles (31 km) away.

Helped by timber harvests from the nearby Ochoco National Forest, the City of Prineville Railroad prospered for decades. The profits from the railroad were so abundant that between 1964 and 1968, the city levied no property taxes. However, with the decline of the timber industry in Oregon, the railroad reported a loss of nearly $1 million between 2002–04 [1].

Prineville is located on the Crooked River at the mouth of Ochoco Creek, 14 miles (23 km) northwest of the Prineville Reservoir.

During the Miocene and Oligocene, great basaltic flows swept through the area.

Prineville has a steppe climate (BSk) according to the Köppen climate classification system.

Les Schwab Tire Centers, a chain of tire stores based in Prineville, has been associated with the city since the company's founding in 1952. As of 2022, the Les Schwab Tire Center chain operates more than 500 stores in California, Idaho, Montana, Nevada, Oregon, Utah, and Washington, does more than $1.5 billion in sales each year, and according to the AP, is the number two private tire retailer in the United States. The company announced on December 12, 2006, that it would be moving the corporate headquarters to nearby Bend, where a growing number of its executives live, including Dick Borgman who became CEO on the same day. In 2006, journalist Mike Rogoway noted: 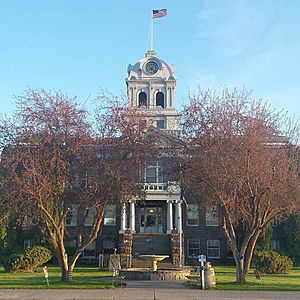 A decade ago, Schwab could have devastated Prineville by pulling out. Now, though, the city that suffered through the downturn in the wood products industry is enjoying an economic renaissance. Federal jobs with the Bureau of Land Management and Forest Service help anchor the economy [Judge Scott Cooper, Crook County administrator, was quoted], while a housing boom and a growing tourism industry have diversified the area.

Prineville got its first Starbucks in 2006, and a plan was floated to reopen the city's long-shuttered movie theater. In December 2006, unemployment was 4.4 percent, the lowest since the 1960s.

In 2010, Prineville was selected as the location for a new data center for Facebook. This center has been met with criticism from environmental groups such as Greenpeace because the power utility company contracted for the center, PacifiCorp, generates 70 percent of its electricity from coal. Since 2010, Facebook has funded multiple projects in Prineville, including water mains and new devices at local schools{cn}.

Both Apple and Facebook have invested over a billion dollars, each, in multiple data centers within Prineville City limits, in the past eight years.

All content from Kiddle encyclopedia articles (including the article images and facts) can be freely used under Attribution-ShareAlike license, unless stated otherwise. Cite this article:
Prineville, Oregon Facts for Kids. Kiddle Encyclopedia.