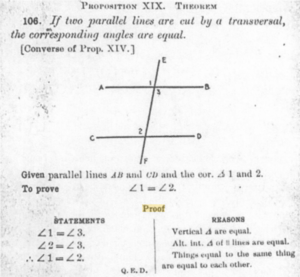 A two-column proof published in 1913

A mathematical proof is a way to show that a math theorem is true. One must show that the theory is true in all cases.

There are different ways of proving a mathematical theorem. 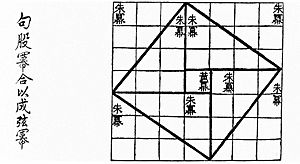 1. State that the proof will be by induction, and state which variable will be used in the induction step.

2. Prove that the statement is true for some beginning case.

3. Assume that for some value n = n0 the statement is true and has all of the properties listed in the statement. This is called the induction step.

4. Show that the statement is true for the next value, n0+1.

An example of proof by induction:

Proof: First, the statement can be written "for all natural numbers n, 2

By induction on n,

Next, assume that for some n=n0 the statement is true. That is, 2

Proof by contradiction is a way of proving a mathematical theorem by showing that if the statement is false, there is a problem with the logic of the proof. That is, if one of the results of the theorem is assumed to be false, then the proof does not work.

When proving a theorem by way of contradiction, it is important to note that in the beginning of the proof. This is usually abbreviated BWOC. When the contradiction appears in the proof, there is usually an X made with 4 lines instead of 2 placed next to that line.

Other Examples of Proofs

by a (which is allowed because a is non-zero), gives:

The quadratic equation is now in a form in which completing the square can be done. To "complete the square" is to find some number k so that

for another number y. In order for these equations to be true,

Adding this number to equation (1) makes

The left side is now a perfect square because

The right side can be written as a single fraction, with common denominator 4a2. This gives

Taking the square root of both sides gives

Getting x by itself gives

All content from Kiddle encyclopedia articles (including the article images and facts) can be freely used under Attribution-ShareAlike license, unless stated otherwise. Cite this article:
Mathematical proof Facts for Kids. Kiddle Encyclopedia.