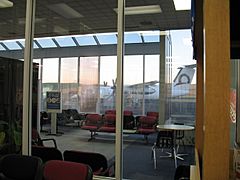 The post-security waiting area
at PUW in July 2006 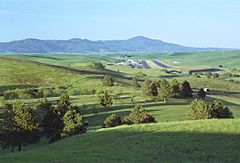 Pullman–Moscow Regional Airport
from the southwest in June 2000, runway 6, aligned with Moscow Mountain in Idaho

The rural airport in the Palouse region is the primary air link for its two land-grant universities, Washington State University in Pullman and the University of Idaho in Moscow. Both universities use the airport for jet charters from Alaska Airlines, Frontier Airlines, and Allegiant Air for their intercollegiate athletic teams.

Aviation at the site began in the 1920s as a grass strip, which was later improved by the Civilian Conservation Corps (CCC) and Works Progress Administration (WPA); the runway was first paved in 1946.

Horizon Air (marketed and sold as Alaska Airlines) is the sole commercial airline serving the airport, flying Bombardier Q400 turboprop aircraft. It began limited service to Pullman–Moscow 40 years ago in December 1981 with Fairchild F-27 aircraft (Friday & Sunday), and daily service (along with Lewiston) in March 1983, on F-27 and Metroliner aircraft. Horizon Air offers 4-5 daily scheduled flights to Seattle/Tacoma. Historically, flight schedules have sometimes included a stop in Lewiston, but currently all scheduled flights at PUW are nonstop to/from Seattle.

Prior to Horizon, Cascade Airways (1969–1986) was the main carrier at the airport, starting Palouse service in late 1971. United Express operated at Pullman–Moscow for over two years, from May 1988 to September 1990.

The modest commercial terminal is a single large room, divided between pre- and post-security areas by a single security checkpoint and glass walls. The waiting area occupies all space beyond the checkpoint but is not commonly used for waiting, as most passengers pass through the security checkpoint immediately before boarding. Both passenger gates are ground-level doors to the tarmac; passengers board via the fold-down aircraft-door stairs, or airstairs (for larger charter aircraft). Gate 1 on the east side of the terminal is used by Horizon Air.

For the 12-month period ending January 1, 2014, the airport had 29,350 aircraft operations, an average of 80 per day: 85% general aviation, 14% scheduled commercial, 1% air taxi, and <1% military. Occasionally, the airport has accepted Boeing 737 aircraft on Alaska Airlines charter flights.

All content from Kiddle encyclopedia articles (including the article images and facts) can be freely used under Attribution-ShareAlike license, unless stated otherwise. Cite this article:
Pullman–Moscow Regional Airport Facts for Kids. Kiddle Encyclopedia.