The Purus River or Rio Purús is a tributary of the Amazon River in South America. Its drainage basin is 63,166 km2 (24,389 sq mi), and the mean discharge is 8,400 m³/s. The river shares its name with the Alto Purús National Park as well as the Purús Province (and its conformed Purús District), one of the four provinces of Peru in the Ucayali Region.

The Purus River rises in Peru. It defines the boundary between Peru and Brazil in the centre of the state of Acre, then runs for a short distance along the boundary of the 231,555 hectares (572,180 acres) Santa Rosa do Purus National Forest, a sustainable use conservation unit created in 2001 after it is joined by the Santa Rosa River. It then flows north east through Manoel Urbano It runs through a continuous forest at the bottom of the great depression, lying between the Madeira River, which skirts the edge of the Brazilian sandstone plateau, and the Ucayali River, which hugs the base of the Andes.

In the state of Amazonas the river runs through the 133,637 hectares (330,220 acres) Arapixi Extractive Reserve, created in 2006 and past the town of Boca do Acre at the end of the BR-317 highway. Further down, it forms the west boundary of the 256,000 hectares (630,000 acres) Purus National Forest, created in 1988. From the town of Pauini down to the town of Lábrea the river is bordered by the 604,209 hectares (1,493,030 acres) Médio Purus Extractive Reserve, created in 2008. Below this it runs through the 197,986 hectares (489,230 acres) Canutama Extractive Reserve along the stretch between the towns of Lábrea and Canutama. In the lowest reaches the river flows through the 1,008,167 hectares (2,491,230 acres) Piagaçu-Purus Sustainable Development Reserve, established in 2003, which holds a large part of its floodplain. It enters the Amazon River west of the Madeira River, which it parallels as far south as the falls of the latter stream.

William Chandless found its elevation above sea level to be only 107 feet (33 m) 590 miles (950 km) from its mouth. It is one of the most crooked streams in the world, and its length in a straight line is less than half of its length following its curves. It is practically only a drainage ditch for the half-submerged, lake-flooded district it crosses. Its width is very uniform for 1000 miles (1600 km) up, and for 800 miles (1300 km) its depth is never less than 45 feet (15 m). 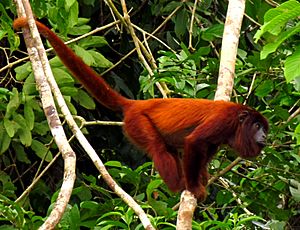 The Purús red howler (Alouatta puruensis) is a species of howler monkey native to Brazil, Peru and north of Bolivia. Peckoltia brevis, a kind of catfish, is found in the middle and upper Amazon within the Purus river basin.

Most of the central and lower sections of the river flow through the Purus várzea ecoregion. In the municipality of Tapauá, Amazonas, the river flows through the 233,864 hectares (577,890 acres) Abufari Biological Reserve, a strictly protected area.

In 2008, a previously unknown pre-Columbian civilization was discovered in the upper region of the river close to the Bolivian border. After much of the forest in the region was cleared for agricultural use, satellite pictures revealed the remains of large geometric earthworks.

All content from Kiddle encyclopedia articles (including the article images and facts) can be freely used under Attribution-ShareAlike license, unless stated otherwise. Cite this article:
Purus River Facts for Kids. Kiddle Encyclopedia.