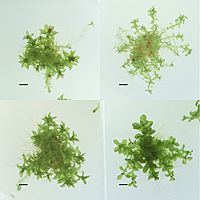 In biology, races are distinct populations within the same species with relatively small morphological and genetic differences.

The populations are ecological races if they arise from adaptation to different local habitats or geographic races when they are geographically isolated.

If sufficiently different, two or more races can be identified as subspecies, which is an official biological taxonomy unit below 'species'.

According to Ernst Mayr, "a subspecies is a geographic race that is sufficiently different taxonomically to be worthy of a separate name"

The key lime is a shrub that grows to a size of about 5 metres in height. It has many thorns. It produces a fruit that is yellow when it is ripe. This fruit is preferred by bartenders to mix cocktails. They prefer this lime, rather than the Persian lime.

The lime plant originally came from southeast Asia, where it is native. It was taken to the Middle East, and Crusaders took it to Europe and North Africa. Spanish explorers took it to the West Indies and the Florida Keys. In 1926, a hurricane destroyed most of the commercially-grown limes in the region. The Persian lime was reintroduced then.

Some of the original shrubs grew wild in the Florida Keys. It became clear that the originally introduced shrubs (now known as Mexican limes) had modified their fruits. These were darker green than the original Persian limes, they also had a thicker skin.

All content from Kiddle encyclopedia articles (including the article images and facts) can be freely used under Attribution-ShareAlike license, unless stated otherwise. Cite this article:
Race (biology) Facts for Kids. Kiddle Encyclopedia.