Radburn was founded in 1929 as "a town for the motor age". Its planners, Clarence Stein and Henry Wright, and its landscape architect Marjorie Sewell Cautley aimed to incorporate modern planning principles, which were then being introduced into England's Garden Cities, following ideas advocated by urban planners Ebenezer Howard, Sir Patrick Geddes and Clarence Perry. Perry's neighbourhood unit concept was well-formulated by the time Radburn was planned, being informed by Forest Hills Gardens, Queens, New York (1909–1914), a garden-city development of the Russell Sage Foundation.

Radburn was explicitly designed to separate traffic by mode, with a pedestrian path system that does not cross any major roads at grade. Radburn introduced the largely residential "superblock" and is credited with incorporating some of the earliest culs-de-sac in the United States.

A community within a community

The Radburn Community enjoys much autonomy within the Borough of Fair Lawn. Pursuant to enabling laws passed in the 1920s and covenants included in the original deeds for the development, the Radburn Association is a private association which is empowered to administer Radburn's common properties and to collect from the owners of properties quarterly association fees to cover the Association's maintenance and operation of communal facilities. The Association is also empowered to restrict development and decoration of Radburn properties in order to maintain a consistent "look" to the community. Use of Radburn Association facilities is limited to residents (though the parks themselves are ungated and the walkways are public property of the Borough.) Radburn's border with the rest of Fair Lawn is the Bergen County Line to the West; southeast of Fernwood Drive, Fulton Place, and Franciscan Way but northwest of Owen Avenue to the northwest; Radburn Road to the northeast; one block of Howard Avenue to the southeast; Alden Terrace to the northeast and east; one block of High Street to the South; Craig Road and its extension through Scribner Road to the East; and Berdan Avenue to the South. Radburn's other full-length east-west cross street is Fair Lawn Avenue, and its sole north-south cross street is Plaza Road. 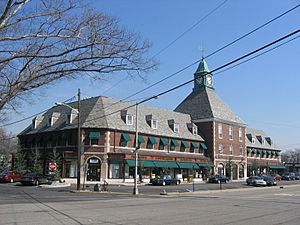 The Radburn School, an elementary school located on the edge of the "B" park, is operated by the Fair Lawn Public Schools. While many of its students are Radburn residents, it serves a larger district. The school, built in 1929, was designed by the architecture firm of Guilbert and Betelle. The building was expanded in 1955 and again in 2005.

In 2016, the elementary school aged students of The Radburn School surpassed their fundraising goal of $60,000 through lemonade stands, rainbow bracelets sales, and a 5k race, but were denied permission to build the playground by The Radburn Association for aesthetic reasons.

Several prominent Fair Lawn businesses exist in Radburn's business district, which is at the intersection of Fair Lawn Avenue and Plaza Road, two important arteries in Fair Lawn. Many of these businesses are within the Radburn Plaza (clock tower) building, a signature landmark of Radburn and Fair Lawn itself. (The building suffered a severe fire several years ago and was recently restored in its prior image.) Nearby stands the Old Dutch House, a tavern built during the time of Dutch colonization of the Americas.

Facing the Plaza Building is the Radburn railroad station, built by the Radburn developers along the Erie Railroad line (later Conrail) and listed on the National Register of Historic Places. Passenger service operates there today on the New Jersey Transit Bergen County Line.

Radburn as a model

In some areas in the UK and Australia the design, coupled with other social planning decisions have led to issues with anti-social problems on the estates.

The design was an influence on Walt Disney's design for Disney World.

All content from Kiddle encyclopedia articles (including the article images and facts) can be freely used under Attribution-ShareAlike license, unless stated otherwise. Cite this article:
Radburn, New Jersey Facts for Kids. Kiddle Encyclopedia.