The Rail Motor Society, based at Paterson, New South Wales, is a community owned collection of preserved self-propelled railway vehicles and equipment from the former New South Wales Government Railways. The items in its collection date from 1923 through to 1972. 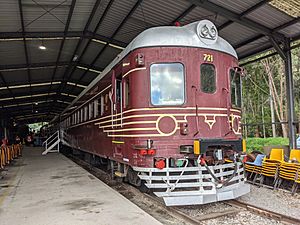 The Society was established in 1984 as a community based not-for-profit organisation and is registered with Australian Charities and Not-for-profits Commission (ACNC) as a charity. The Society's primary aim is to collect, preserve and operate a representative fleet of New South Wales Government Railways rail motors. The Society's sole focus was to be on self-propelled or diesel multiple unit rolling stock, a principle that it still adheres to today. The Society is accredited as a rail transport operator in New South Wales, Victoria, Queensland, the Australian Capital Territory and South Australia by the Office of the National Rail Safety Regulator (ONRSR).

The Society's origins stem from the Newcastle Branch of the Australian Railway Historical Society (NSW Division) where a small band of enthusiastic members proposed a local organisation to preserve and operate some of the CPH rail motors that were planned for withdrawal at the end of 1983 by the State Rail Authority (SRA). The nucleus of the Society was established in 1984 with the support of four established heritage organisations – the NSW Division of the Australian Railway Historical Society, the New South Wales Rail Transport Museum, the Zig Zag Railway and the Sydney Tramway Museum. Each of these organisations purchased rail motors when they were offered for sale by the SRA and these were pooled to form the nucleus of the Society's fleet. A site for its base was identified in the old goods yard opposite Paterson Railway Station and a lease was negotiated for its use. The first rolling stock items were delivered to Paterson from Sydney on New Year's Eve of 1984.

The Rail Motor Society is run entirely by volunteers and funds its day-to-day activities, restorations and construction programs from the proceeds of its heritage train operations and donations from the public.

The Society's collection is listed on the NSW State Heritage Register and contains CPH 3 the oldest surviving rail motor in NSW and the only operating 400 Class rail motor. The 620/720 class rail cars NPF 621 and NTC 721 are part of RailCorp's core heritage fleet and are managed on behalf of Transport Heritage NSW by the Society under a custody arrangement. This set was originally built in 1961 to replace steam hauled suburban services in the Newcastle area and spent its entire working life based in Newcastle.

In October 1986, CPH 1 was returned to traffic painted in post-war cream and green livery. It was joined by CPH 7 in January 1987 and together these have toured NSW and beyond extensively. In July 2011 they were joined by CPH 3.

In August 1986, HPC 402 was leased back to the State Rail Authority and after an overhaul used as a radio system test unit operating across NSW. Initially leased for six months, it would not be until July 2000 that it returned to the Society after travelling some 200,000 km. It has continued to see regular main line use, often being hired by rail network owners for radio testing and for infrastructure and executive inspections. Since 2000, it has performed numerous rounds of these operational activities. Recent operations include testing interfaces for Sydney Trains Digital Train Radio System (DTRS), ARTC executive inspections and in 2013 route training for the newly standardised North East main line and the Benalla to Oaklands line in Victoria. 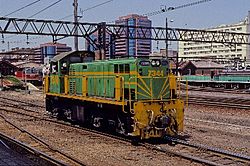 In 2018, the Society became the custodian of former NSW Government Railways (and 3801 Limited's) 73 Class shunting locomotive, 7344, under a custody agreement with Transport Heritage NSW. Like 621/721, 7344 is part of the RailCorp heritage fleet. 7344 was delivered to Paterson on 28 December 2018. In Society service, 7344 will be returned to its original Indian Red colour scheme.

42-Foot Rail Motor Trailer CTC 51 is currently under restoration to operational service by the Society.

The Society's Depot and Museum is situated in the old Goods Yard adjacent to Paterson Railway Station. This one hectare site is located on the north-western side of the North Coast Railway Line, 213 kilometres north of Sydney and 20 kilometres north of Maitland. The site houses the Society's rail motor fleet, a large three-road storage shed, maintenance facilities and the old station Master's cottage. The cottage houses a small museum with a collection of railway memorabilia. Member facilities are provided in two carriages (TAM 503 and BR 1395) located on an isolated track segment. During 2017, the Depot facilities were expanded and improved with the construction of a 30-metre by 4-metre extension to the shed to create a weather-proof workshop. This work was funded by a NSW Heritage Grant. During 2020, the Depot site was increased in size with the inclusion of the abandoned ARTC siding located in the railway corridor adjacent to the eastern boundary.

The Society's own rolling stock collection – eleven of the current fourteen vehicles – was listed on the New South Wales State Heritage Register on 17 August 2001.

Other units in the fleet, 620 Class 2-car diesel unit (621/721) and locomotive 7344, that are under operational management by the Society for Transport Heritage NSW, are also listed on the NSW State Heritage Inventory.

Other societies and organisations with which the Rail Motor Society is affiliated include:-

All content from Kiddle encyclopedia articles (including the article images and facts) can be freely used under Attribution-ShareAlike license, unless stated otherwise. Cite this article:
Rail Motor Society Facts for Kids. Kiddle Encyclopedia.