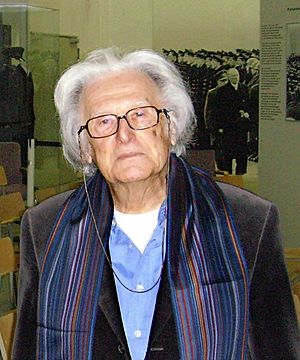 Ralph Giordano (March 23, 1923 – December 10, 2014) was a German writer and publicist. He survived the Holocaust and since then he has been writing books about his experiences. For a short-while he was a communist. Giordano was also an activist and critic. Giordano was born in Hamburg, Germany.

Giordano died in Cologne, Germany from complications of a broken hip following a fall, aged 91.

All content from Kiddle encyclopedia articles (including the article images and facts) can be freely used under Attribution-ShareAlike license, unless stated otherwise. Cite this article:
Ralph Giordano Facts for Kids. Kiddle Encyclopedia.