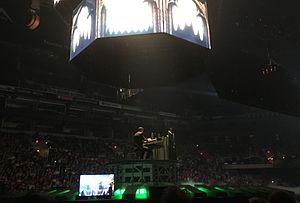 Djawadi performing "Light of the Seven" at the Game of Thrones Live Concert Experience.

Ramin Djawadi (born July 19, 1974) is a German-Iranian composer of orchestral music for movies and television. He was born in Duisburg, Germany to an Iranian father and German mother. Djawadi may be best known for his Grammy-nominated, guitar-driven score for Iron Man and for the TV series Prison Break, Game of Thrones and Person of Interest.

Djawadi then went out on his own with Blade: Trinity, collaborating with The RZA for director David Goyer. This was the beginning of his relationship with Goyer for both movies and television. Djawadi wrote the score for Goyer's horror thriller The Unborn, which was produced by Michael Bay. he also worked with Goyer on the television series FlashForward. This earned him his second Emmy nomination. Djawadi also composed the Emmy-nominated theme music for Prison Break and the theme for the related show Breakout Kings. Djawadi's score for the movie Mr. Brooks earned him a World Soundtrack Awards “Discovery of the Year” nomination. His other scores include Deception, starring Hugh Jackman and Ewan McGregor, and Robert Towne's Ask the Dust.

Djawadi scored the first Sony Animation project, Open Season as well as the sequel Open Season 2. Other animation scores include The Chubbchubbs Save Xmas. Djawadi's work in these movies got him noticed by the filmmakers of the Belgium-based NWave. They created one of the first animated movies in 3D, Fly Me to the Moon. Djawadi finished Warner Brothers' Clash of the Titans in 2010. Djawadi also scored the soundtrack for the 2010 video game Medal of Honor and HBO's fantasy drama Game of Thrones.

He is currently composing the music for the new J.J. Abrams TV series, Person of Interest.

His usual orchestrators are Stephen Coleman and Tony Blondal

All content from Kiddle encyclopedia articles (including the article images and facts) can be freely used under Attribution-ShareAlike license, unless stated otherwise. Cite this article:
Ramin Djawadi Facts for Kids. Kiddle Encyclopedia.