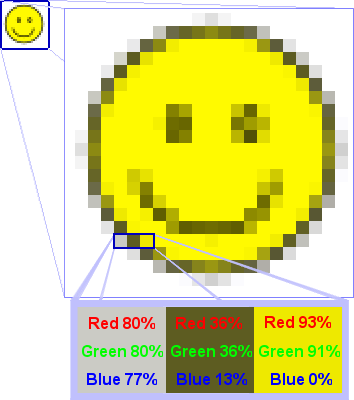 Imagine the little smiley face in the top left corner is a raster image. When zoomed in, it might look like the bigger smiley face. Every square stands for a pixel. Looking even closer, you can see the three different pixels at the bottom. Their colors made by adding up the amounts of red, green and blue in each one.

Raster graphics (or bitmap graphics) is one of two kinds of computer graphics. With raster graphics, images are modeled as big collections of pixels. Usually they form an image shaped like a rectangle. Each pixel holds something, like color or transparency. Raster images are used very often. Computer screens are made of a raster of points. Vector graphic images are rasterised that way. Images that are difficult to make as a vector, like photographs, are often made in the form of a raster image.

Many printers today use computer languages like Postscript or PCL. These languages are based on vectorized images, most of the time. To be printed, these images need to be translated into raster graphics first. This is done by a part called a Raster Image Processor. Most modern printers have those processors inside the printer. Some printers use a special piece of software on the computer to do that job.

All content from Kiddle encyclopedia articles (including the article images and facts) can be freely used under Attribution-ShareAlike license, unless stated otherwise. Cite this article:
Raster graphics Facts for Kids. Kiddle Encyclopedia.