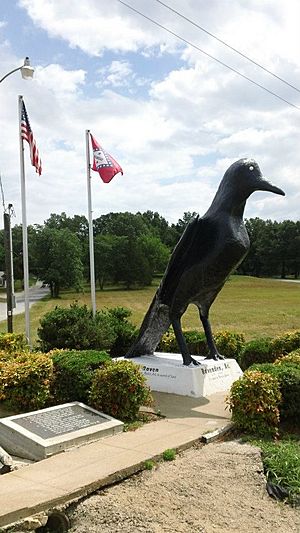 Ravenden is a town in Lawrence County, Arkansas, United States. The population was 470 at the 2010 census.

U.S. Highway 63 runs through the town, as does the Burlington-Northern Railroad. The community building, still in use, was dedicated in 1960. Ray Ellis was mayor at that time. Also in 1960, the railroad agent for the Frisco Railroad (St. Louis-San Francisco Railroad) was Charles Roark. The Frisco was bought out by, and merged with, the Burlington-Northern Railroad in 1980.

There are quite a number of other cities and towns in Lawrence County. These include Walnut Ridge, the county seat, and the cities of Black Rock and Hoxie. Towns include: Alicia, College City, Imboden, Lynn, Minturn, Portia, Powhatan, Sedgwick, Smithville, and Strawberry.

There were 209 households out of which 34.9% had children under the age of 18 living with them, 53.6% were married couples living together, 12.9% had a female householder with no husband present, and 30.6% were non-families. 26.8% of all households were made up of individuals and 9.6% had someone living alone who was 65 years of age or older. The average household size was 2.44 and the average family size was 2.97.

All content from Kiddle encyclopedia articles (including the article images and facts) can be freely used under Attribution-ShareAlike license, unless stated otherwise. Cite this article:
Ravenden, Arkansas Facts for Kids. Kiddle Encyclopedia.