Reading is 7.5 miles (12.1 km) northwest of Worthington. According to A.P Rose's History of Nobles County, Reading is nearer to the geographic center of the county than any other community. Reading has a post office with ZIP code 56165. 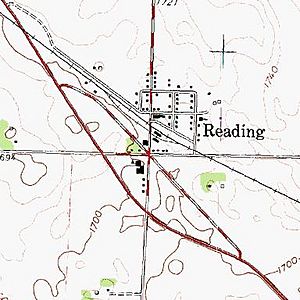 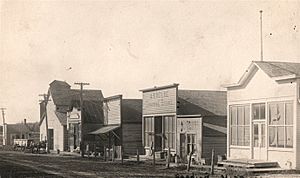 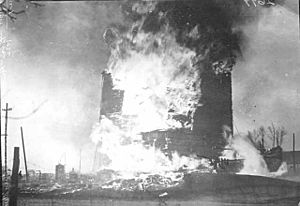 Fire that destroyed the Anderson Elevator in 1936

Much of the land that the community of Reading now occupies was claimed by H.H. Read in 1876. He farmed the land for 23 years until the Burlington, Cedar Rapids and Northern Railway arrived in 1899. Thomas H. Brown, Burlington's right-of-way man, purchased 271⁄2 acres of land from Read for the purpose of establishing a townsite. He also purchased 20 more acres from Worthington banker and real estate dealer George Dayton. Dayton later went on to found the Dayton's Department Store chain. In the fall of 1899, A. J. Keller arrived on the first train and took up his duties as station agent. Early in 1900, H. H. Douglas and the Rothchild Grain Company both built grain elevators in Reading after flipping a coin to determine location. Coal and lumber yards were quickly established by James S Ramage. By the time the town was surveyed and platted in the summer of 1900, a general store, a hardware store, a blacksmith shop, and a restaurant had been added to Reading's list of businesses. The Summit Lake Presbyterian Church was moved into town from the country, and a small school house was also moved into town to educate the youth of Reading. The Reading State Bank was established in 1902. The Farmer's Mutual Telephone Company was established in 1905 with lines connecting to Rushmore, Wilmont, and Fulda.

The Burlington Railroad was later taken over by the Rock Island Railroad, and operated until the 1970s. In the 1980s, the line was abandoned and the tracks were torn up. Minnesota State Highway 266 was constructed in 1949, connecting Worthington, Reading, and Wilmont. The State of Minnesota maintained the highway for 50 years, but responsibility for upkeep was transferred to Nobles County in 2003. It has been renamed Nobles County Road 25.

All content from Kiddle encyclopedia articles (including the article images and facts) can be freely used under Attribution-ShareAlike license, unless stated otherwise. Cite this article:
Reading, Minnesota Facts for Kids. Kiddle Encyclopedia.