Worthington is a city and county seat of Nobles County, Minnesota, United States. The population was 12,764 at the 2010 census.

The city's site was first settled in the 1870s as Okabena Station on a line of the Chicago, St. Paul, Minneapolis and Omaha Railway, later the Chicago and North Western Railway (now part of the Union Pacific Railroad) where steam engines would take on water from adjacent Lake Okabena. More people entered along with one A.P. Miller of Toledo, Ohio, under a firm called the National Colony Organization. Miller named the new city after his wife's maiden name. 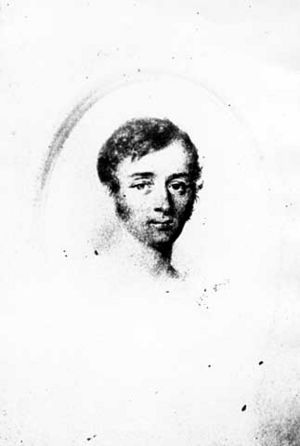 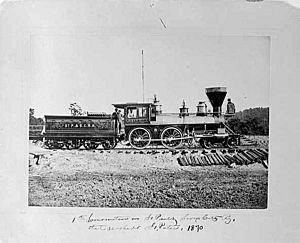 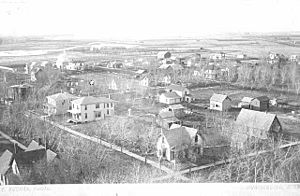 The first European likely to have visited the Nobles County area of southwestern Minnesota was French explorer Joseph Nicollet. Nicollet mapped the area between the Mississippi and Missouri Rivers in the 1830s. He called the region “Sisseton Country” in honor of the Sisseton band of Dakota Indians then living there. It was a rolling sea of wide open prairie grass that extended as far as the eye could see. One small lake in Sisseton Country was given the name “Lake Okabena” on Nicollet’s map, “Okabena” being a Dakota word meaning “nesting place of the herons.”

The town of Worthington was founded by "Yankees" (immigrants from New England and upstate New York who were descended from the English Puritans who settled New England in the 1600s).

In 1871, the St. Paul & Sioux City Railway Company began connecting its two namesake cities with a rail line. The steam engines of that time required a large quantity of water, resulting in water stations being needed every eight to twelve miles (19 km) along their routes. One of these stations, at the site of present-day Worthington, was designated as “The Okabena Railway Station.”

Meanwhile, in that same year, Professor Ransom Humiston of Cleveland, Ohio, and Dr. A.P. Miller, editor of the Toledo Blade, organized a company to locate a colony of New England settlers who had already settled in Northern Ohio along the tracks of the Sioux City and St. Paul Railway. These were people were "Yankee" settlers whose parents had moved to the region of Northeast Ohio known as the Connecticut Western Reserve from the six New England states. These settlers were primarily members of the Congregational Church, though due to the Second Great Awakening, many of them had converted to Methodism and Presbyterianism, and some had become Baptists before coming to what is now Minnesota. This colony – the National Colony – was to be a village of temperance, a place where evangelical Methodists, Presbyterians, Congregationalists, and Baptists could live free of the temptations of alcohol. A town was plotted, and the name was changed from the Okabena Railway Station to Worthington - Worthington being the maiden name of Dr. Miller’s mother-in-law. On April 29, 1872, regular passenger train service to Worthington was started, and on that very first train were the first of the National Colony settlers. One early arrival described the scene:

We were among the first members of the colony to arrive at the station of an unfinished railroad… There was a good hotel, well and comfortably furnished, one or two stores neatly furnished and already stocked with goods, [and] several other[s] in process of erection… The streets, scarcely to be defined as such, were full of prairie schooners, containing families waiting until masters could suit themselves with “claims,” the women pursuing their housewifely avocations meanwhile – some having cooking stoves in their wagons, others using gypsy fires to do their culinary work; all seeming happy and hopeful.

Some settlers from New England were however, drinking men, most of whom were civil war veterans from Massachusetts and Maine, who came into conflict with the temperance movement. A curious event took place on Worthington’s very first Fourth of July celebration. Hearing that there was a keg of beer in the Worthington House Hotel, Professor Humiston entered the hotel, seized the keg, dragged it outside, and destroyed it with an axe. A witness described what happened next:

''Upon seeing this, the young men of the town thought it to be rather an imposition, and collected together, procured the services of the band, and under the direction of a military officer marched to the rear of the hotel, and with a wheelbarrow and shovel took the empty keg that had been broken open, and playing the dead march with flag at half staff marched to the flagpole in front of Humiston’s office where they dug a grave and gave the empty keg a burial with all the honors attending a soldier’s funeral.

They then, with flag at full mast and with lively air, marched back to the ice house, procured a full keg of beer, returning to the grave, resting the keg thereon. Then a general invitation was given to all who desired to partake, which many did until the keg was emptied… In the evening they reassembled, burning Prof. Humiston in effigy about 10 p.m. Thus ended the glorious Fourth at Worthington, Minn. —Sibley Gazette July 5, 1872

In spite of tensions between pro-temperance and anti-temperance factions, the town grew rapidly. By the end of summer in 1872, eighty-five buildings had been constructed where just one year before there had been nothing but a field of prairie grass.

Settlers poured into the region. At first they came almost exclusively from the six New England states due to issues of overpopulation combined with land shortages, which led to a stream of "Yankee" immigrants leaving that region. Some had come from Upstate New York and had parents and grandparents who had moved to that region from New England during the early 1800s and late 1700s. Due to the large number of New Englanders and New England transplants from upstate New York the town of Worthington, like much of Minnesota at this time, was very culturally continuous with early New England culture for much of its early history. It was the age of the Homestead Act when 160 acres (0.65 km2) of government land could be claimed for free. All one had to do was live on the land and “improve” it, a vague phrase if ever there was one. In such an atmosphere, settlers without connection to the National Colony also arrived in great number, and few of those were temperance activists. The ensuing winter was a severe one, and swarms of grasshoppers stripped farmers’ fields bare in the summer of 1873. Still, settlers came. 1874 produced a bumper harvest, followed by another grasshopper invasion in 1875. 1876 and 1877 were both good farming years. Grasshoppers returned for the last time in 1879, and a bright future began for southwestern Minnesota. According to the 1880 census, Nobles County boasted 4435 residents, 636 of them living in Worthington.

In the early 1900s German immigrants began arriving in Worthington in large numbers, though this later group did not come directly from Germany, but rather (mostly) came to Worthington from other places in the midwest, especially the state of Ohio, where their communities had already been established.

Unlike other parts of the country, the Germans were not subjected to xenophobia in Nobles County, Minnesota but rather were welcomed with open arms by the "Yankee" population who had established the town. This led to many writing back to Ohio, which led to chain migration to the region which greatly increased the German-American population. The "Yankee" population of old stock Americans of English descent did not come into conflict with the German-American community for much of their early history together in what is now Worthington. However eventually the two communities would be divided on the issue of World War I in which the Yankee community would be divided and the Germans were unanimously opposed to American entry into the war. The Yankee community was generally pro-British, however many of the Yankees also did not want America to enter the war themselves. The Germans were sympathetic to Germany and did not want the United States to enter into a war against Germany, but the Germans were not anti-British. Prior to World War I, many German community leaders in Minnesota and Wisconsin spoke openly and enthusiastically about how much better America was than Germany, due primarily (in their eyes) to the presence of English law and the English political culture the Americans had inherited from the colonial era, which they contrasted with the turmoil and oppression in Germany which they had so recently fled. Other immigrant groups followed the Germans including setters from Ireland, Norway and Sweden. For German, Irish and Scandinavian immigrants seeking a new life, southwestern Minnesota was a new world.

On December 12, 2006 the Immigration and Customs Enforcement (I.C.E) staged a coordinated predawn raid at the Swift & Company meat packing plant in Worthington and at five other Swift plants in western states, interviewing workers and hauling hundreds off in buses.

There were 4,458 households of which 34.7% had children under the age of 18 living with them, 48.4% were married couples living together, 10.7% had a female householder with no husband present, 6.3% had a male householder with no wife present, and 34.6% were non-families. 28.4% of all households were made up of individuals and 13.9% had someone living alone who was 65 years of age or older. The average household size was 2.79 and the average family size was 3.36.

There were 4,311 households out of which 30.5% had children under the age of 18 living with them, 52.4% were married couples living together, 8.9% had a female householder with no husband present, and 34.4% were non-families. 28.9% of all households were made up of individuals and 15.5% had someone living alone who was 65 years of age or older. The average household size was 2.55 and the average family size was 3.12.

All content from Kiddle encyclopedia articles (including the article images and facts) can be freely used under Attribution-ShareAlike license, unless stated otherwise. Cite this article:
Worthington, Minnesota Facts for Kids. Kiddle Encyclopedia.