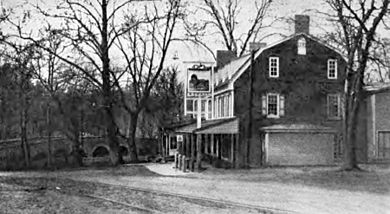 Red Lion Tavern as it appeared in 1915

Red Lion, settled in 1852, was named after one of the first pubs in town, the Red Lion Tavern.

Red Lion was a main stop along the old Maryland and Pennsylvania Railroad, known locally as the "Ma & Pa" Railroad. That railroad ran from York County to Baltimore, Maryland.

Red Lion was also known nationwide for its furniture industry, with several large factories producing ornate, hand crafted furniture for over 100 years. The furniture industry has mostly shifted to kitchen cabinet production and retail store fixtures over the last 40 years.

The Consumers Cigar Box Company and Red Lion Borough Historic District are listed on the National Register of Historic Places.

Red Lion is located about 35 miles southeast of Harrisburg.

According to the United States Census Bureau, the borough has a total area of 1.3 square miles (3.3 km²), all of it land.

There were 2,575 households out of which 31.6% had children under the age of 18 living with them, 46.8% were married couples living together, 12.1% had a female householder with no husband present, and 36.1% were non-families. 29.6% of all households were made up of individuals and 11.0% had someone living alone who was 65 years of age or older. The average household size was 2.37 and the average family size was 2.92. 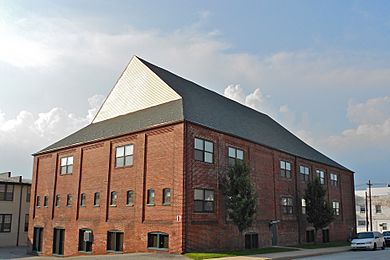 Red Lion is home to an extensive array of local underground bands and independent local artists, perhaps the most popular being Halestorm, who reached the top ten on the US Mainstream Rock charts and receives extensive local radio play.

Red Lion also had a fully functional opera house and a downtown movie theater until the mid-1960s. The opera house has since been converted to housing, and the movie theater was demolished and is now a parking lot.

Red Lion has many talented veteran and up and coming artists and musical talents of all genres (including funk, blues, jazz, bluegrass and country). The Guitar Spot USA and Tom's Music Trade are part of what's now known as a "Musician's Row" of sorts to local musicians and artists.

In 2007 construction began on a one mile long walking trail beginning at the Red Lion Historical Society Train Station and ending at Springwood Road.

All content from Kiddle encyclopedia articles (including the article images and facts) can be freely used under Attribution-ShareAlike license, unless stated otherwise. Cite this article:
Red Lion, York County, Pennsylvania Facts for Kids. Kiddle Encyclopedia.