Red Mesa is a census-designated place (CDP) in Apache County, Arizona, United States. The population was 480 at the 2010 census.

There were 78 households, out of which 45% had children under the age of 18 living with them, 39% were married couples living together, 26% had a female householder with no husband present, and 32% were non-families. 30% of all households were made up of individuals, and 5% had someone living alone who was 65 years of age or older. The average household size was 3.0 and the average family size was 3.9. 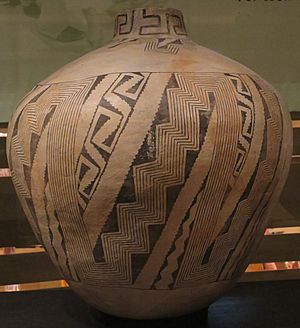 The Red Mesa prehistoric pottery type was named for this Arizona area. Made from about 950 to 1050 AD, it is a subdivision of Cibola Whiteware. Designs are usually banded and can be much busier than earlier types, but simple designs are also common. Pots are sually slipped (often chalky) and polished, but some examples not slipped and not well polished.

All content from Kiddle encyclopedia articles (including the article images and facts) can be freely used under Attribution-ShareAlike license, unless stated otherwise. Cite this article:
Red Mesa, Arizona Facts for Kids. Kiddle Encyclopedia.