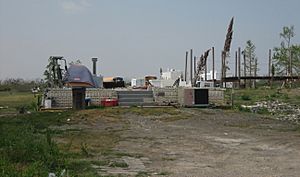 Reggio, also named Bencheque, is an unincorporated community belonging to Saint Bernard Parish, in Louisiana. Europeans settled there in the second half of the eighteenth century. It has a small Isleño population.

Saint Bernard Parish's early European settlers were Spanish families from the Canary Islands who arrived between 1778 and 1784. "El Primero Poblacin" (the First Settlement), now called Toca, was settled in 1779. "El Segundo Poblacin" (the Second Settlement) was settled by Isleños from Gomera in the Canaries. They named their settlement after their home village of Benchijigua on the island. A total of three hundred and ninety-three Gomerans, in eighty-five families, migrated to Louisiana.

With the arrival of French-speaking sugar planters to the region, the name of the village changed to Bencheque and then to Bencheque-Reggio.

All content from Kiddle encyclopedia articles (including the article images and facts) can be freely used under Attribution-ShareAlike license, unless stated otherwise. Cite this article:
Reggio, Louisiana Facts for Kids. Kiddle Encyclopedia.