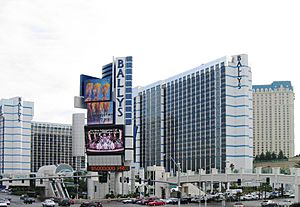 Bally's Las Vegas, which is in the size category of an English "Regional Casino".

A Regional Casino, more commonly known as a Super Casino (or occasionally known as Mega Casino), is the term given to the largest category of casino that was to have been permitted under UK law. It is meant to be the same size as the larger casinos in Las Vegas. The first Regional Casino was proposed to be in the City of Manchester. This was stopped by the UK government soon after Gordon Brown became Prime Minister of the United Kingdom.

The Gambling Act 2005 revised many regulations relating to gambling in England. Amongst the most controversial provisions was the establishment of a number of 'destination casinos' in the style of Las Vegas, commonly referred to in the media as 'Super Casinos'

Initial drafts of the act proposed eight regional casinos but concerns expressed in the national media and by a range of addiction related social and religious groups meant that the final revision of the act permitted only one casino of the largest size, referred to as a 'Regional Casino', with a further eight 'large' and eight 'small' casinos of a smaller sizes and with reduced Jackpot limits.

Prior to the act there were 140 casinos in the UK, the largest of which in Star City, Birmingham had a floor area of around 950 square metres. Customers were required to register twenty-four hours prior to gaming.

Under the terms of the Gambling Act the Secretary of State is able to define each type of Casino, with reference to any matter he or she chooses; although the act specifically mentions as facts to consider the number, location and concentration of gaming tables, and the floor area designated for a specific purpose.

Definitions have been determined such that the 'super casino' will have a minimum customer area of 5000 square metres and at most 1250 unlimited-jackpot slot machines.

In May 2006, a short-list of eight sites, selected from various ones submitted by local councils, was announced for the location of the Regional Casino. These were:

On 30 January 2007 it was announced that the first Regional Casino would be built in East Manchester near the City of Manchester Stadium. This was a shock to the Blackpool and The O2 (formerly the Millennium Dome) bids. Both of them were thought of as the favourites. However, the Blackpool bid organisers pledged to continue the work in getting government approval for a 'supercasino'.

All content from Kiddle encyclopedia articles (including the article images and facts) can be freely used under Attribution-ShareAlike license, unless stated otherwise. Cite this article:
Regional casino Facts for Kids. Kiddle Encyclopedia.