Reptiliomorpha is a clade of the amniotes and those tetrapods that share a more recent common ancestor with amniotes than with living amphibians (lissamphibians).

Unfortunately, different experts have used the term in several different ways. It has even been used for fossils of early amphibians. It is best used for animals which lay cleidoic eggs, but are not synapsids. Otherwise precursors of reptiles (sauropsids) get lumped together with precursors of mammals (synapsids).

Its only justification is that it may not always be possible to decide which group a fossil is from. But gradually, as with Seymouria, it is possible to separate fossils into more specific grouups.

Gephyrostegids, seymouriamorphs and diadectomorphs were land-based, reptile-like amphibians, while embolomeres were aquatic amphibians with long body and short limbs. Their anatomy falls between the mainly aquatic Devonian labyrinthodonts and the first reptiles. University of Bristol paleontologist Professor Michael J. Benton gives the following characteristics for the Reptiliomorpha (in which he includes embolomeres, seymouriamorphs and diadectomorphs): 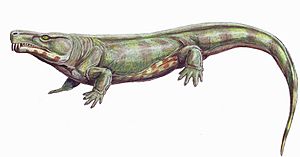 The groups traditionally assigned to Reptiliomorpha, i.e. embolomeres, seymouriamorphs and diadectomorphs, differed from their contemporaries, the non-reptiliomorph temnospondyls, in having a deeper and taller skull, but retained the primitive kinesis (loose attachment) between the skull roof and the cheek (with exception of some specialized taxa, such as Seymouria, in which the cheek was solidly attached to the skull roof). The deeper skull allowed for laterally placed eyes, contrary to the dorsally placed eyes commonly found in amphibians. The skulls of the group are usually found with fine radiating grooves. The quadrate bone in the back of the skull held a deep otic notch, likely holding a spiracle rather than a tympanum.

The vertebrae showed the typical multi-element construction seen in labyrinthodonts. According to Benton, in the vertebrae of "anthracosaurs" (i.e. Embolomeri) the intercentrum and pleurocentrum may be of equal size, while in the vertebrae of seymouriamorphs the pleurocentrum is the dominant element and the intercentrum is reduced to a small wedge. The intercentrum gets further reduced in the vertebrae of amniotes, where it becomes a thin plate or disappears altogether. Unlike most labyrinthodonts, the body was moderately deep rather than flat, and the limbs were well-developed and ossified, indicating a predominantly terrestrial lifestyle except in secondarily aquatic groups. Each foot held 5 digits, the pattern seen in their amniote descendants. They did, however, lack the reptilian type of ankle bone that would have allowed the use of the feet as levers for propulsion rather than as holdfasts.

Seymouriamorphs reproduced in amphibian fashion with aquatic eggs that hatched into larvae (tadpoles) with external gills; it is unknown how other tetrapods traditionally assigned to Reptiliomorpha reproduced. 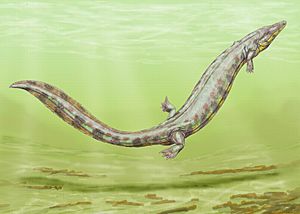 During the Carboniferous and Permian periods, some tetrapods started to evolve towards a reptilian condition. Some of these tetrapods (e.g. Archeria, Eogyrinus) were elongate, eel-like aquatic forms with diminutive limbs, while others (e.g. Seymouria, Solenodonsaurus, Diadectes, Limnoscelis) were so reptile-like that until quite recently they actually had been considered to be true reptiles, and it is likely that to a modern observer they would have appeared as large to medium-sized, heavy-set lizards. Several groups however remained aquatic or semiaquatic. Some of the chroniosuchians show the build and presumably habits of modern crocodiles and were probably also similar to crocodylians in that they were river-side predators. While some other Chroniosuchians possessed elongated newt- or eel-like bodies. The two most terrestrially adapted groups were the medium-sized insectivorous or carnivorous Seymouriamorpha and the mainly herbivorous Diadectomorpha, with many large forms. The latter group has, in most analysis, the closest relatives of the Amniotes.

From aquatic to terrestrial eggs

Their terrestrial life style combined with the need to return to the water to lay eggs hatching to larvae (tadpoles) led to a drive to abandon the larval stage and aquatic eggs. A possible reason may have been competition for breeding ponds, to exploit drier environments with less access to open water, or to avoid predation on tadpoles by fish, a problem still plaguing modern amphibians. Whatever the reason, the drive led to internal fertilization and direct development (completing the tadpole stage within the egg). A striking parallel can be seen in the frog family Leptodactylidae, which has a very diverse reproductive system, including foam nests, non-feeding terrestrial tadpoles and direct development. The Diadectomorphans generally being large animals would have had correspondingly large eggs, unable to survive on land.

Fully terrestrial life was achieved with the development of the amniote egg, where a number of membranous sacks protect the embryo and facilitate gas exchange between the egg and the atmosphere. The first to evolve was probably the allantois, a sack that develops from the gut/yolk-sack. This sack contains the embryo's nitrogenous waste (urea) during development, stopping it from poisoning the embryo. A very small allantois is found in modern amphibians. Later came the amnion surrounding the fetus proper, and the chorion, encompassing the amnion, allantois, and yolk-sack.

Westlothiana, a small reptile-like tetrapod which may be an early lepospondyl, close to the origin of amniotes, or both

Exactly where the border between reptile-like amphibians (non-amniote reptiliomorphs) and amniotes lies will probably never be known, as the reproductive structures involved fossilize poorly, but various small, advanced reptiliomorphs have been suggested as the first true amniotes, including Solenodonsaurus, Casineria and Westlothiana. Such small animals laid small eggs, 1 cm in diameter or less. Small eggs would have a small enough volume to surface ratio to be able to develop on land without the amnion and chorion actively effecting gas exchange, setting the stage for the evolution of true amniotic eggs. Although the first true amniotes probably appeared as early as the Middle Mississippian sub-epoch, non-amniote (or amphibian) reptiliomorph lineages coexisted alongside their amniote descendants for many millions of years. By the middle Permian the non-amniote terrestrial forms had died out, but several aquatic non-amniote groups continued to the end of the Permian, and in the case of the chroniosuchians survived the end Permian mass extinction, only to die out prior to the end of the Triassic. Meanwhile, the single most successful daughter-clade of the reptiliomorphs, the amniotes, continued to flourish and evolve into a staggering diversity of tetrapods including mammals, reptiles, and birds.

All content from Kiddle encyclopedia articles (including the article images and facts) can be freely used under Attribution-ShareAlike license, unless stated otherwise. Cite this article:
Reptiliomorpha Facts for Kids. Kiddle Encyclopedia.