Reserve is a village in Catron County, New Mexico, United States. The population was 289 as of the 2010 census, down from 387 in 2000. It is the county seat of Catron County. Currently the village has two grocery stores, a hardware store, a bar, fairgrounds, and a health clinic. It is the site where Elfego Baca held off a gang of Texan cowboys who wanted to kill him for arresting cowboy Charles McCarty.

Reserve is situated in the Gila National Forest about 12 miles (19 km) east of the Arizona/New Mexico border. It is the county seat of Catron County, the state's largest and least densely populated county. The area includes ruins from the Mogollon and Anasazi tribes, as well as petroglyphs and historic Old West sites.

Catron became a county in 1921. It was named after a famous attorney and political leader from Santa Fe, Thomas B. Catron. 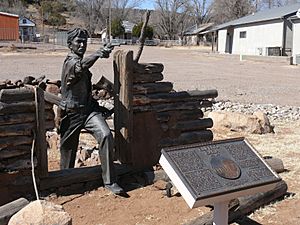 In the 1860s, Mexican-Americans established a string of villages along the river, naming them the Upper, Lower, and Middle San Francisco Plazas. In the late 1870s Anglo settlers began arriving. They renamed Upper Frisco Plaza as Milligan's Plaza, naming it after a merchant and saloon owner.

Milligan's Plaza was the site of the legendary Frisco Shootout of Elfego Baca. In 1882, or perhaps 1884, the nineteen-year-old Baca apparently appointed himself deputy sheriff and rode 130 miles (210 km) from Socorro to the Plaza. There he set about bringing justice to the Mexican-American community which had been beset by drunken cowboys.

Outnumbered by 80 Texans, Baca holed up in a jacal, the flimsiest kind of hut, and was besieged by the mob. Bullets and dynamite could not dislodge him, and in a gun battle lasting 33 hours, he inflicted death and grievous injury on some of his adversaries without being injured himself.

According to the United States Census Bureau, the village has a total area of 0.54 square miles (1.4 km2), all of it land.

There were 177 households, out of which 25.4% had children under the age of 18 living with them, 41.8% were married couples living together, 14.1% had a female householder with no husband present, and 41.8% were non-families. 39.0% of all households were made up of individuals, and 16.4% had someone living alone who was 65 years of age or older. The average household size was 2.14 and the average family size was 2.84. 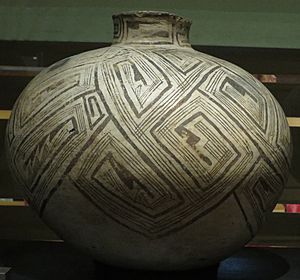 This Ancestral Pueblo pottery type was named for the Reserve area, where it was first found, and is a major subdiviosion of the Cibola Whiteware group. Common designs are opposed solid and hatched motifs that are interlocked with each other. Usually the hatching is diagonal, but parallel hatching in late examples occurs as well. Squiggle hatching may occur on some early examples. Usually the hatched motifs average two to four times as wide as the solid motifs but occasionally approach the same size. Framing and hatching lines are usually the same width. "Bulls eyes" are common in Reserve Black-on-White.

The city is served by the Reserve Independent School District.

All content from Kiddle encyclopedia articles (including the article images and facts) can be freely used under Attribution-ShareAlike license, unless stated otherwise. Cite this article:
Reserve, New Mexico Facts for Kids. Kiddle Encyclopedia.