Rialto (often The Rialto, or Rialto Towers) is a skyscraper located at 525 Collins Street, in the western side of the central business district of Melbourne, Victoria, Australia. It was the tallest office building in the Southern Hemisphere when it was constructed. 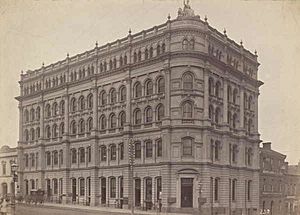 Robbs Building, demolished in 1980 to make way for the Rialto's concrete and glass podium 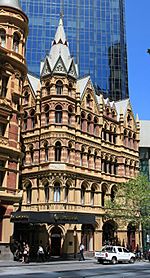 The old Rialto Building was retained as part of the development.

The site of Rialto (Flinders Lane, Collins Street, Winfield Square and Robbs Lane) was occupied by several buildings including numerous small warehouses on Flinders Lane, Robb's Buildings (now demolished, named for the owner, railway builder John Robb), a grand classical styled 5-storey Victorian office building designed by Thomas Watts and Sons two other interwar buildings on Collins Street, the Rialto Building (1889) designed by William Pitt and the Winfield Building (1890) designed by Charles Debro & Richard Speight, all part of an historic streetscape along Collins Street running up to the Olderfleet Building to the east.

During the 1970s, the large derelict site was owned by the National Mutual Life Association of Australasia and it was around 1979 when the first development proposal was prepared and submitted to the Melbourne City Council.

Little progress was made until 1980 when the site was acquired by Grollo Australia in a joint venture with St Martin's Properties. Though a campaign was run by the National Trust of Victoria against the demolition of Robb's Building, Grocon successfully argued that it stood in the way of its major twin-tower proposal. During the application process the Rialto and Windfield buildings were added to the Victorian Heritage Register, and a different future was determined for them. This involved the creation of a hotel utilising the whole of the long rear wing of the Rialto Building, the replacement of the rear wing of the Winfield Building, and the creation of an atrium between. 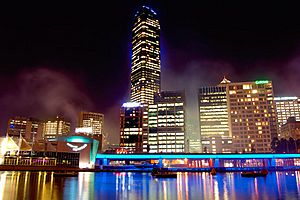 Robb's buildings were subsequently demolished opening the way for construction to begin on the Rialto.

Designed by architects Gerard de Preu and Partners in association with Perrott Lyon Mathieson, the building was built between 1982 and 1986, opening in October 1986, and takes its name from the much older Rialto Building next door. The massive glass curtain wall façade of reinforced blue tinted mirrored glass is its central feature and changes colour during the day, ranging from a trademark dark blue to a brilliant gold during sunset.

Early tenants moved into the lower floors while the upper floors were still under construction in 1984.

Inspired by the popular Empire State Building Run-Up, a stair race up the 242 m (794 ft), 1222–1254 step race to the 53rd floor of the Rialto building was first run in the late 1980s and became an annual event with both men's and women's divisions known as the Rialto Run-up. Previous winners include Robin Rishworth (1989,1990); Geoff Case (1991). The winner was awarded with a trip to New York City to compete in the Empire State Building race. The event was run until 2005 and competitors had to go up 1254 steps.

A ~180-degree panoramic image of Melbourne's Hoddle Grid (CBD) and Southbank on the right side, as viewed from the Rialto Observation Deck 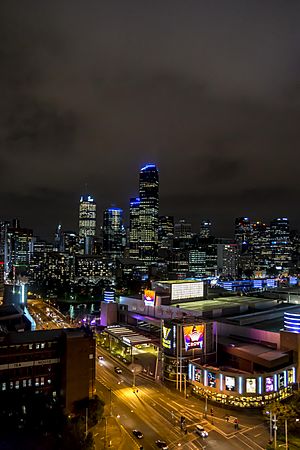 Rialto consists of two interconnected towers, North and South, with rooftop floors at Level 41 and Level 58 respectively. There are 36 passenger lifts, 95 km (59 mi) of lift cables, 706 lift door openings and 1,450 staircase steps. The outer surface of the building has 13,000 windows. There are five basement levels of car park available for occupiers and casual users. When completed in 1986, The Rialto surpassed Sydney's MLC Centre to become Australia's tallest building at 251 m (823 ft). It was the tallest for five years until being surpassed by 101 Collins Street in 1991. It is currently the tenth tallest building in Australia.

All content from Kiddle encyclopedia articles (including the article images and facts) can be freely used under Attribution-ShareAlike license, unless stated otherwise. Cite this article:
Rialto Towers Facts for Kids. Kiddle Encyclopedia.