List of tallest buildings in Melbourne facts for kids

The skyline of Melbourne in January 2019, as viewed from the Shrine of Remembrance.

Melbourne, the second-largest city in Australia, is home to approximately 757 completed high-rise buildings. Of those completed and or topped-out, 48 buildings are defined as "skyscrapers" (buildings which reach a height of at least 150 metres (490 ft)); more than any other city in Australia. Of the ten tallest buildings in Australia, five are located in Melbourne. Most of Melbourne's tallest skyscrapers are concentrated in the City Centre precinct; however, other locations of prominent skyscrapers and tall buildings in Melbourne include Carlton, Docklands, Southbank, South Melbourne, South Yarra and St Kilda Road.

Geographically, Melbourne's central business district comprises a western skyline and an eastern skyline. Buildings are more densely packed in the west than the east, although the east has two of the city's tallest buildings to architectural feature—120 Collins Street and 101 Collins Street, respectively, whilst the Rialto Towers (located on the west side) is tallest by roof. As a whole, the city overtook Sydney in 2011 as having the tallest skyline in the country and the 24th–tallest in the world, when the heights of the top ten tallest buildings in the city are combined.

Historically, Melbourne has represented several "firsts" and been the holder of various records, both in Australia and internationally. The city is notable for being one of the first cities in the world to build numerous tall office buildings, alongside New York City and Chicago in the United States, though Melbourne's first skyscraper boom was very short lived. Melbourne was the location for Australia's first high–rise, the APA Building, constructed during this boom in 1889. Melbourne was also the location for the first modern post-WW2 high-rise, ICI House built in 1958. From 1986 to 2005, three of Melbourne's skyscrapers held the title of tallest building in Australia, with the Rialto Towers (1986–91), 101 Collins Street (1991) and 120 Collins Street (1991–2005). Since 2006, the city has been home to the second-tallest building in the country, the Eureka Tower; surpassed only by the Gold Coast's Q1, the Eureka Tower still maintains the title of tallest building in Australia to roof. Several other skyscraper projects have since emerged, such as Australia 108—which when completed in 2020, will surpass the Eureka Tower in height, and become the tallest building in Australia to roof.

The late 1880s 'land boom' saw the construction of approximately a dozen 'lofty edifices' of 8 to 10 storeys, made possible by the introduction of a pressurised hydraulic power network to operate lifts, and taking load bearing brickwork to great heights. The APA Building (Australian Building) at 12 storeys plus spire, was by far the tallest, and can claim to be Australia's first 'skyscraper' and amongst the tallest building in the world when completed in 1889. Aside from the APA Building, a total of 11 'skyscrapers' were located in the Melbourne city centre during this period, including the Finks Building and the Prell's Building. Many of the high-rises of this era were constructed in a Victorian or Queen Anne architecture, which led to the Miles Lewis comment that Melbourne had become a "Queen Anne Chicago". None of them, however, were preserved and most were torn down between the 1960s and early 70s. 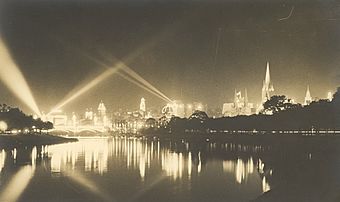 Melbourne's skyline from the Yarra River in 1934.

Melbourne was the first city in Australia to undergo a post-war high-rise boom beginning in the late 1950s, though Sydney in the following decades built more, with over 50 high-rise buildings constructed between the 1970s–90s.

In 1972, 140 William Street (formerly BHP House) became Melbourne's first skyscraper to surpass the height of 150 metres. The William Street building was the city's tallest for a few years, and remains one of the few heritage registered skyscrapers in Melbourne. Slightly taller, the Optus Centre was completed in 1975; and then in 1977 Nauru House was crowned the tallest building in Melbourne, at a height of 182 metres. In 1978, what would be the first of two Collins Place towers was opened, at a height of 188 metres.

By the early 1980s, Melbourne had a total of 6 buildings above 150 metres, with the completion of the Wentworth (later Regent then Sofitel) Hotel at Collins Place in 1980. In 1986, the Rialto Towers surpassed Sydney's MLC Centre as the tallest building not only in Australia but in the Southern Hemisphere, with a height of 251 metres. At the time of its opening it was the 23rd–tallest building in the world. The 1990s brought Melbourne another 9 buildings over 150 metres; 5 of which exceed heights of 200 metres. Specifically, 1991 saw the construction of the 260-metre-tall (850 ft) 101 Collins Street, which was crowned the tallest building in Australia and the Southern Hemisphere; it was surpassed in height later that year with the completion of the nearby 120 Collins Street. The skyscraper, which stands at 265 metres in height, held the titles for tallest building in Australia and the Southern Hemisphere for fourteen years, until the completion of the Gold Coast's Q1 in 2005.

Such trend has continued throughout the 2010s, with Prima Pearl, Victoria One, 568 Collins Street and Vision Apartments being constructed, all of which stand above 220 metres (720 ft) in height. This feat has been described as the "Manhattanization of Melbourne". From the beginning of the decade, the city has experienced an "unprecedented" high-rise construction boom; of buildings expected to reach 150 metres (or above) in height, 5 have topped-out, 18 are under-construction, 30 have received approval, and another few have been proposed—more than any other city in Australia. Of those currently under construction, three projects will surpass 250 metres (820 ft) in height; Aurora Melbourne Central, West Side Place Tower 1, and Australia 108. The latter will be the tallest; reaching 317 metres (1,040 ft) in height, Australia 108 will become the tallest building in Melbourne upon completion in 2020, the tallest building to roof in Australia, Australia's first skyscraper to comprise at least 100 floors, and Melbourne's first building to be defined as a "supertall" skyscraper (buildings which reach heights of 300 metres to 600 metres).

The proliferation of skyscrapers in Australia over the past decades has also contributed to the city rivalry between Sydney and Melbourne. Whilst the first skyscraper in Australia was constructed in Sydney in 1967 (Australia Square), Melbourne has had the most skyscrapers above 150 metres in the country and indeed within Oceania, for almost 33 years in total; from 1972 to 1989 (equal first with Sydney during 1972–74 and 1976–77), from 1991 to 1999, in 2006 (shared with Sydney), and again since 2015 (equal to Sydney from 2015 to 2016).

Following much discussion, a 40-metre (130 ft) height limit was introduced to Melbourne in 1916, along with regulations concerning fire-proof construction. This is often said to have been the limit of fire ladders at the time, but this was an idea the then fire chief allowed to be widely circulated even though the tallest ladder rose to only 82 feet, in order to ensure that fire safety was paramount. The main reasons for the limit as well as fire proofing were the preservation of light and air to the streets, avoiding congestion, and the influence of the City Beautiful movement, preferring evenly scaled streetscapes over those with buildings of varying heights.

The height limit was discontinued in the 1950s, which enabled the construction of ICI House at a height of 81 metres (266 ft), and Melbourne therefore became the first city in Australia to change its height controls.

In September 2015, the Minister for Planning, Richard Wynne, introduced a 12-month height limit of approximately 229 metres (750 ft) for all buildings proposed in the City Centre and segments of Southbank, as part of interim planning laws set to be reviewed and made permanent in September 2016. Should projects exceed the height limit, developers will need to make a special case to the Minister, outlining the proposal's state significance. Buildings proposed prior to the height limit, are exempt from the new law. 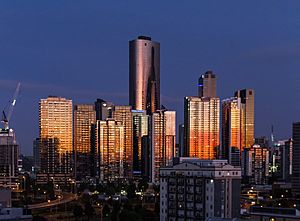 During the last fifteen years, high-rise density has taken form in urban renewal regions like Southbank.

Significant new skylines have emerged outside of the Melbourne City Centre, especially within the inner-city suburb of Southbank. This precinct, located adjacent to the City Centre, includes some of the tallest buildings in Melbourne, such as Eureka Tower, Prima Pearl and Freshwater Place North.

St Kilda Road, a locality adjacent to the City Centre, and the inner-city suburb Carlton, each comprise a skyscraper above 150 metres in height. Other inner-city suburbs, such as Docklands, South Melbourne and South Yarra each have skyscrapers (of heights reaching at least 150 metres) in proposed/approved or construction stages of development.

Most of Melbourne's skyscrapers constructed by the 1990s were built for commercial purposes—specifically, used as offices. Exceptions to this, include the mixed-use building Sofitel Hotel (1980) on Collins Place, and the all-hotel Crown Towers (1997) in Southbank. 2005 ushered in the first residential skyscrapers in Melbourne, with two built that year. By 2010, 72% of skyscrapers built in Melbourne were of commercial use, 12% residential, 12% mixed-use, and 4% hotel. The trend towards residential skyscrapers has continued significantly; in 2015, 58% of skyscrapers present within the city were of commercial use, 26% residential, 13% mixed-use and 3% hotel. These figures are set to change dramatically by 2020; when factoring those buildings still under-construction (but to be completed by 2020), 40% of the city's skyscrapers will be of residential use, 33% commercial, 23% mixed-use, 2% hotel, and 2% government.

The skyline of Melbourne city as viewed from Williamstown, Victoria, in June 2015. Prominent skyscrapers visible in this image include Bourke Place and 568 Collins Street, left of centre; the Rialto Towers, centre; and on the right of centre, 120 Collins Street, 101 Collins Street, Freshwater Place North, Prima Pearl and the Eureka Tower.

Melbourne comprises 48 skyscrapers completed or topped out within the city, which stand at least 150 metres (490 ft) tall, based on standard height measurement. Such measurement includes spires and architectural details, but does not include antenna masts. An equal sign (=) following a rank indicates the same height between two or more buildings. An asterisk (*) indicates that the building is still under construction, but has topped out. The "built" column indicates the year in which a building was completed. Height: S = Spire, R = Roof. Height is measured to the nearest metre.

This lists the tallest building in each precinct of Melbourne based on standard height measurement.

This lists the tallest buildings in Melbourne by their respective functions—office, hotel, residential and mixed-use—based on standard height measurement.

Skyscrapers at least 200 metres in height

Buildings above 200 metres in height in Melbourne. Skyscrapers in black are complete, while skyscrapers coloured orange are in the construction phase

This lists buildings that once held the title of "tallest building in Melbourne".

This is a list of currently Topped Out, Under Construction, Approved and Proposed highrise / skyscrapers set for Melbourne.

Australia 108 under construction in August 2018. The project is expected to be completed in 2020.

Aurora Melbourne Central under construction in December 2016. The project is expected to be completed in 2019.

Premier Tower under construction in July 2019. The project is expected to be completed in 2020.

All content from Kiddle encyclopedia articles (including the article images and facts) can be freely used under Attribution-ShareAlike license, unless stated otherwise. Cite this article:
List of tallest buildings in Melbourne Facts for Kids. Kiddle Encyclopedia.