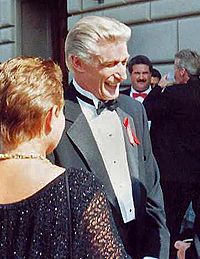 Richard Mulligan (November 13, 1932 – September 26, 2000) was an American television program and movie actor who starred primarily in sitcoms. He was especially notable for his role as Dr. Harry Weston in the TV sitcom The Golden Girls and the 1970s sitcom Soap. Mulligan was born in New York City.

He died due to colorectal cancer on September 26, 2000 in Los Angeles, California, aged 67.

All content from Kiddle encyclopedia articles (including the article images and facts) can be freely used under Attribution-ShareAlike license, unless stated otherwise. Cite this article:
Richard Mulligan Facts for Kids. Kiddle Encyclopedia.