Richmond is a suburb of Sheffield in South Yorkshire, England. It lies in the eastern part of the city (grid reference SK403854). 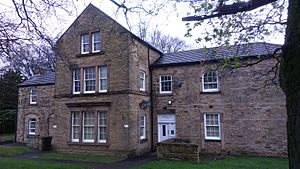 Richmond was historically a small settlement consisting of a few cottages and Richmond Hall Farm, built in 1668 and demolished in 1966. Gateposts from the farm, which may have originally flanked an entrance to Sheffield Park, can still be seen amidst a housing estate dating from the late 1960s.

The suburb is served by St Catherine of Siena church, designed by Basil Spence.

Richmond gives its name to one of the 28 electoral wards of Sheffield, in the southern part of the city. In addition to the suburb of Richmond, Richmond ward also includes the districts of Four Lane Ends, Intake, and Woodthorpe, and covers an area of 4.5 km2. The population of the ward in 2011 was 17,724 people in 7,827 households. It is one of the five wards that form the Sheffield Heeley parliamentary constituency. The boundary changed at the local elections in May 2016.

Intake lies south of Manor Top. It is primarily a 1930s residential area known as the area where Jarvis Cocker grew up.

Built in the 1930s, Woodthorpe lies to the east of Intake. It has two pubs, the "High Noon" and "The Springwood", and also has a primary school (Woodthorpe), which was rebuilt in September 2005. However now "The Springwood" has closed down due to unpopular demand in the area and it is now abandoned and boarded up.

All content from Kiddle encyclopedia articles (including the article images and facts) can be freely used under Attribution-ShareAlike license, unless stated otherwise. Cite this article:
Richmond, Sheffield Facts for Kids. Kiddle Encyclopedia.