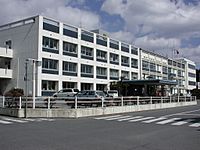 The mayor of the city is Futoshi Toba.

As of 2011, oyster farming produced ¥40 million in annual sales for the city.

There is one railroad line with six stations in Rikuzentakata.

On 14 March, a BBC report showed a picture of the town. The report described the city as "almost completely flattened." Reporters could not tell how many people had survived. The city did have tsunami shelters. The shelters were designed to protect people from a wave 3 to 4 meters tall. However, the tsunami of March 2011 was 13 meters high in the city. The wave covered the areas that were supposed to be safe. Local officials estimate that 20% to 40% of the cities people died. "Rikuzen-Takata effectively no longer exists." The city had a 6.5 meter high seawall, but it was not enough. More than 80% of 8,000 houses were destroyed by the tsunami.

Sixty-eight city officials, about one-third of the city's municipal employees, were killed. The town's mayor, Futoshi Toba, was at work at the city hall and survived. His wife was at their seaside home and she died. 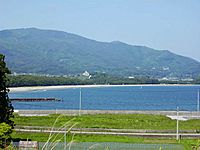 Takata-Matsubara (高田松原) is part of the coastline, two kilometers long. About seventy thousand pine trees used to grow there. It was selected as one of the 100 Landscapes of Japan (Shōwa period) in 1927 and in 1940 it was named a Place of Scenic Beauty. After the 2011 tsunami only one tree was still there. A single, ten-meter tall, two hundred year-old tree is all that is left from the forest. The tree is only five meters from the sea and may be damaged by too much salt. The Association for the Protection of Takata-Matsubara along with the city and prefectural governments are trying to protect the last pine tree.

All content from Kiddle encyclopedia articles (including the article images and facts) can be freely used under Attribution-ShareAlike license, unless stated otherwise. Cite this article:
Rikuzentakata, Iwate Facts for Kids. Kiddle Encyclopedia.