Kesennuma is a city located in the extreme northeast of Miyagi Prefecture, Japan, founded on June 1, 1953. It wraps around the western part of Kesennuma Bay, and also includes the island of Ōshima. Its coastline forms the southern boundary of the Rias Coastline National Park, which stretches north all the way to Aomori Prefecture.

The city borders Hirota Bay, Kesennuma Bay, and the Pacific Ocean to the east and Minamisanriku, Miyagi to the south. The Ōkawa River flows through the city and into Kesennuma Bay. Ferry service to Ōshima Island and Karakuwa peninsula is available.

Large sections of the city were destroyed by the 2011 Tōhoku earthquake and tsunami and major fires on March 11, 2011. 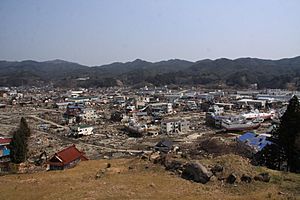 Kesennuma City was formed on June 1, 1953, when Kesennuma Town, Shishiori Village, and Matsuiwa Village were merged. It grew in size on April 1, 1955, when Niitsuki Village, Hashikami Village, and Oshima Village were annexed, and again in 2006 and 2009 with the incorporation of Karakuwa and Motoyoshi.

The city is Japan's busiest port for processing bonito and swordfish. Presently, fishing and associated industries account for 85% of jobs in the town.

On March 11, 2011, large parts of the city were destroyed by a tsunami which followed the Tōhoku earthquake. The island of Oshima and its 3,000 residents, included in the city limits, were isolated by the tsunami which damaged the ferry connections. 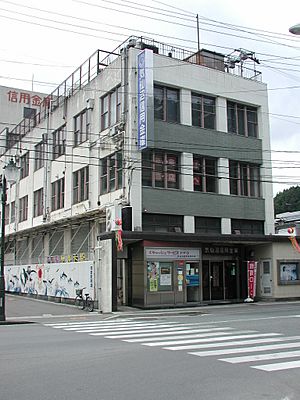 After the tsunami, spilled fuel from the town's fishing fleet caught fire and burned for four days. The city had confirmed 837 deaths with 1,196 missing.

Kesennuma relies on tourism and commercial fishing, the latter being what the city is known for, especially its tuna, pacific saury and skipjack tuna production, keeping the fishing port very active. It also has a shark fin fishery.

Kesennuma, as the largest center in northeast Miyagi, is an education center for high school, featuring five of them. It also has eight junior high schools and fourteen elementary schools.

All content from Kiddle encyclopedia articles (including the article images and facts) can be freely used under Attribution-ShareAlike license, unless stated otherwise. Cite this article:
Kesennuma, Miyagi Facts for Kids. Kiddle Encyclopedia.