The River Bela is a short (approximately 4 miles (6.5 km)) river in the county of Cumbria, England. It is in the ancient county of Westmorland.

The river is formed by the confluence of Peasey Beck and Stainton Beck at Overthwaite. It runs through Beetham where it still powers the Heron Corn Mill, and formerly powered the Billerud paper mill. It then flows through the deer park of Dallam Tower before skirting around the south of the village of Milnthorpe and joining the River Kent estuary between Sandside and Milnthorpe.

At its mouth it was formerly crossed by the Sandside Viaduct on the Hincaster Branch Line railway from Arnside to Hincaster, demolished after the line was closed to passengers in 1942 and the track lifted in 1966.

During World War II a prisoner of war camp was built beside the river at . After the war the camp became an open prison, and there is now a residential school on the site. 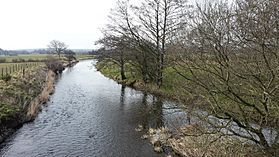 All content from Kiddle encyclopedia articles (including the article images and facts) can be freely used under Attribution-ShareAlike license, unless stated otherwise. Cite this article:
River Bela Facts for Kids. Kiddle Encyclopedia.