The Duddon is a river of north-west England. It rises at a point 1,289 feet (393 m) above sea level near the Three Shire Stone at the highest point of Wrynose Pass . The river descends to the sea over a course of about 15 miles (24 km) before entering the Irish Sea at the Duddon Sands. In total, from source to the westernmost part of Duddon Sands, its length is 43 kilometres (27 mi). For its entire length the Duddon forms the boundary between the historic counties of Lancashire and Cumberland and since local government re-organisation in 1974 the Duddon has been in the ceremonial county of Cumbria.

The catchment area of the River Duddon includes a substantial part of the south-western Lake District fells, including the eastern slopes of Corney Fell, Ulpha Fell and Harter Fell; the southern slopes of the mountains around the head of Langdale, and the western slopes of Dunnerdale and Seathwaite Fells. 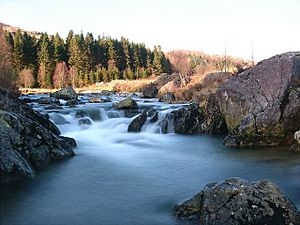 From its source the Duddon falls rapidly over a distance of two miles (3.2 km) to Cockley Beck at the head of Dunnerdale. Close to the hamlet of Seathwaite the Tarn Beck from Seathwaite Tarn is subsumed. The river then takes a south-westerly direction to Ulpha Bridge. Passing under the Duddon Valley road, the river assumes a southerly course to Duddon Bridge where it is crossed by the A595 trunk road. After about a mile (1.6 km) the Duddon becomes tidal as it opens into the Duddon Estuary between Furness and south-west Cumberland. 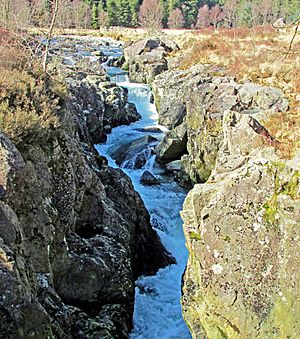 The Duddon at Troutal Gorge above Seathwaite 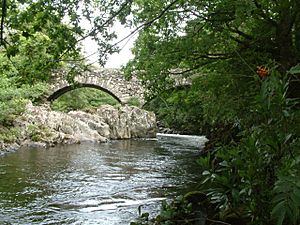 Rawfold Bridge on the Duddon

NOT envying shades which haply yet may throw
A grateful coolness round that rocky spring,
Bandusia, once responsive to the string
Of the Horatian lyre with babbling flow;
Careless of flowers that in perennial blow
Round the moist marge of Persian fountains cling;
Heedless of Alpine torrents thundering
Through icy portals radiant as heaven’s bow;
I seek the birth-place of a native Stream.—
All hail, ye mountains! hail, thou morning light!
Better to breathe at large on this aëry height
Than toil in needless sleep from dream to dream;
Pure flow the verse, pure, vigorous, free, and bright,
For Duddon, long-loved Duddon, is my theme!

The River Duddon is a salmon fishery. The section of the river downstream from Seathwaite is popular with canoeists and is graded as 3 with some easy 4. From Birks Bridge, through Troutal Gorge to Seathwaite there are some difficult canoeing sections graded at 5 requiring higher water levels to navigate.

Many parts of the Duddon Valley are visited by tourists, but the location is outside the main tourist area of the Lake District. Consequently, most of the visitors are day trippers who live locally, or who travel from elsewhere in northern England: Hunter Davies considered its unfrequented nature one of its great attractions.

All content from Kiddle encyclopedia articles (including the article images and facts) can be freely used under Attribution-ShareAlike license, unless stated otherwise. Cite this article:
River Duddon Facts for Kids. Kiddle Encyclopedia.