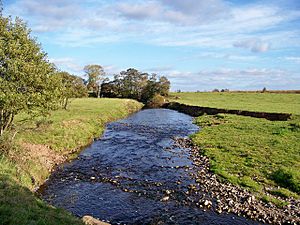 The River Sark or Sark Water is a river best known for forming part of the western border between Scotland and England. Most of its short length, however, is entirely in Scotland. It flows into the estuary of the River Esk just to the south of Gretna.

The Scots defeated the English at the Battle of Sark in October 1448. It was a significant victory for the Scots, who had not defeated England since the Battle of Otterburn in 1388.

The river has been made famous, partially by the Robert Burns' poem, Such a Parcel of Rogues in a Nation, which in the first verse it says:

Fareweel to a' our Scottish fame,
Fareweel our ancient glory;
Fareweel ev'n to the Scottish name,
Sae fam'd in martial story.
Now Sark rins over Solway sands,
An' Tweed rins to the ocean,
To mark where England's province stands-
Such a parcel of rogues in a nation!"

The poem's subject was the alleged sale of Scotland in the Anglo-Scottish Treaty of Union. The most famous town on the Sark is Gretna Green, best known for its wedding industry. The A74 motorway passes over it.

The area around the Sark was notoriously marshy and sandy, as much of the coast of the north west Irish Sea is. The small section between the lower end of the Sark and the River Esk is known as the "debatable lands", and was formerly a haven for criminals and outlaws who wished to exploit the weakness of the two countries' border defences. The boundary between the Sark and the Esk is called the Scots' Dike.

Its name is not connected with "Cutty Sark".

All content from Kiddle encyclopedia articles (including the article images and facts) can be freely used under Attribution-ShareAlike license, unless stated otherwise. Cite this article:
River Sark Facts for Kids. Kiddle Encyclopedia.