Rivers of Kent facts for kids 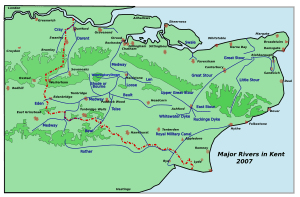 The catchment area of the Medway covers almost 25% of the county. The detailed map has a diagram of that catchment area, which includes its main tributaries: the rivers Eden, Bourne (or Shode), Teise, Beult, Loose and Len.

Tributaries of the River Medway

The River Stour is also known as the Great Stour, especially above its confluence with the Little Stour at Plucks Gutter. Its catchment area covers the eastern part of Kent.

Tributaries of the River Stour

Its tributary is the River Cray.

A minor river from Temple Ewell to Dover

A Wealden river. It is included here since for part of its journey near Bodiam it forms the boundary between Kent and East Sussex.

All content from Kiddle encyclopedia articles (including the article images and facts) can be freely used under Attribution-ShareAlike license, unless stated otherwise. Cite this article:
Rivers of Kent Facts for Kids. Kiddle Encyclopedia.