Robert I, Duke of Normandy facts for kids 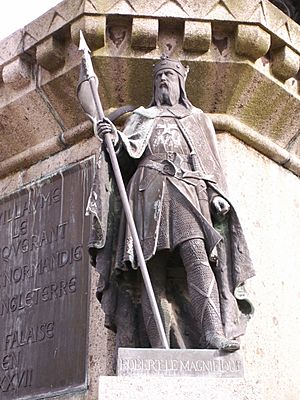 Statue of Robert the Magnificent as part of the Six Dukes of Normandy statue in Falaise.

Robert the Magnificent (French: le Magnifique) († 1035), was the sixth Duke of Normandy from 1027 until he died returning from a pilgrimage. Robert's reign was a period in the history of Normandy. He was the father of William the Conqueror, who in 1066 became King of England.

Robert was the second son of Richard II of Normandy and Judith. He was probably born between 1005 and 1010. Their father had decided that the older son, Richard III, would succeed him as duke. Robert would became Count of Hiémois. In August 1026 their father, Richard II, died and Richard III became the fifth duke. But once Richard III began to reign, Robert was not satisfied with his position. He raided the diocese of his uncle Robert II, Archbishop of Rouen. He also captured his brother's city of Falaise. Robert's rebellion lasted through the end of 1026 and into early 1027. Finally Richard III laid to Falaise and brought the walls down. Robert surrendered and promised his .

When Richard III died shortly after Robert's surrender, there were suspicions that Robert might have caused his brother's death. Robert was accepted, however, as the sixth duke following his brother. But the Robert I had started against his brother Richard III didn't stop when the two made peace. There were still many feuds which had started between neighboring barons. These continued in Normandy during much of Robert’s reign. It was also during this time that many of the lesser left Normandy to seek their fortunes in southern Italy and elsewhere. Soon after he became duke and possibly in revenge for supporting his brother, Robert I gathered an army and began raiding the lands of his uncle, Robert II, Archbishop of Rouen. Only a brief allowed his uncle to leave Normandy in exile. The Archbishop then placed an of on Robert and all of Normandy. The edict was only removed when Archbishop Robert was allowed to return and all his lands were restored. Robert also attacked another powerful church leader, his cousin Hugo d'Ivry, Bishop of Bayeux. Robert banished him from Normandy. Robert also seized a number of church properties belonging to the abbey of Fécamp.

In spite of all his troubles in Normandy Robert decided to get involved in the civil war in Flanders. This feud was between Baldwin V, Count of Flanders and his father Baldwin IV who the younger Baldwin had driven out of Flanders. Baldwin V, supported by king Robert II of France, his , was persuaded to make peace with his father in 1030. This happened only after Duke Robert promised the elder Baldwin his military support.

Robert gave shelter to Henry I of France against his mother, Queen Constance. The queen wanted her younger son Robert to succeed his father Robert II as king of France. For his help Henry I gave Robert the French Vexin. In the early 1030s Alan III, Duke of Brittany began to expand from the area of Rennes and appeared to have wanted the area around Mont Saint-Michel After raiding Dol and stopping Alan's attempts to raid Avranches, Robert mounted a major campaign against his cousin Alan III. However, Alan appealed to Archbishop Robert of Rouen (they were both his nephews). The Archbishop arranged a peace between Duke Robert and his vassal Alan III.

Robert's cousins, the Athelings Edward and Alfred, had been living in exile at the Norman Court. They were the sons of his aunt Emma of Normandy and Athelred, King of England. At some point Robert attempted an invasion of England on their behalf but was stopped by unfavorable winds. The king of England, Cnut the Great sent envoys to Duke Robert offering to settle half the Kingdom of England on Edward and Alfred. After postponing the invasion he chose to also postpone the decision until after he returned from Jerusalem.

The Church and his pilgrimage

Robert's attitude towards the Church changed completely since his uncle's return from exile. To make up for what he had done to the Church earlier he restored all the property that he or his vassals had taken. He also decided to make a pilgrimage to Jerusalem to make up for his sins. After making his illegitimate son William his heir, he set out on his pilgrimage. He travelled by way of Constantinople and reached Jerusalem. He fell seriously ill and died on the return journey at Nicaea on 2 July 1035. His son William, aged about eight, succeeded him.

According to the historian William of Malmesbury, decades later, Robert's son William sent a mission to Constantinople and Nicaea to return his father's body to Normandy for . Permission was granted, but, having travelled as far as Apulia (Italy) on the return journey, the learned that William himself had died. They then decided to Robert's body in Italy.

By his concubine, Herleva of Falaise, he was father of:

All content from Kiddle encyclopedia articles (including the article images and facts) can be freely used under Attribution-ShareAlike license, unless stated otherwise. Cite this article:
Robert I, Duke of Normandy Facts for Kids. Kiddle Encyclopedia.