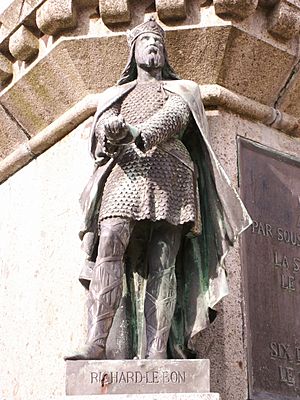 Statue of Richard II the Good as part of the Six Dukes of Normandy statue in Falaise.

Richard II († 1026), called the Good (French: Le Bon), was the Duke of Normandy from 996 to 1026. He was the first to assume the title of duke and built up his court to resemble that of a king. He commissioned Dudo of Saint-Quentin to write a detailed history of the Norman Dukes showing their nobility and Christian patronage.

Richard II was the oldest son of Richard I the Fearless and Gunnora. He succeeded his father as Duke of Normandy in 996. During his minority, which was the first five years of his reign, his regent was his uncle Count Ralph of Ivrea. Ralph put down a peasant revolt at the start of Richard's reign.

Richard was very religious like his overlord king Robert II of France. Richard used his army to support the king against the duchy of Burgundy. He formed a marriage alliance with Brittany by marrying his sister Hawise of Normandy to Geoffrey I, Duke of Brittany. It became a double alliance when he married Geoffrey's sister, Judith of Brittany.

In the 980s the Vikings had been raiding England again. They would then cross the English Channel to Normandy to sell their plunder. Norman and Viking relations were good. Richard's father had hired Viking mercenaries in the 960s. He also allowed them safe haven in Normandy. This caused problems in England and with the Pope in Rome. In 990 representatives of the Pope negotiated a treaty between England and Normandy. Richard I agreed not to aid enemies of England (including Vikings). From 997 to 1000 a great Viking army attacked Wessex a number of times. In 1000 they came to Normandy and were allowed to land by Richard II. This broke the treaty between his father and the English king. In 1000-1001 the English attacked Normandy on the Cotentin Peninsula. The raid was led by king Ethelred the Unready of England. Ethelred had given orders that Richard be captured, shackled and brought to England. But the English were not prepared for the rapid response of the Norman cavalry and were quickly defeated.

Richard wanted to make peace with the English king. He gave his sister Emma of Normandy in marriage to King Ethelred. Ethelred gave Emma the city of Exeter as a dowry. This turned out to be an important marriage as it later gave Richard's grandson, William the Conqueror, a claim to the throne of England. In 1013 when Sweyn Forkbeard invaded England, Emma with her two sons Edward and Alfred fled to Normandy. After losing his throne King Ethelred followed shortly. Soon after the death of Ethelred, Cnut, King of England forced Emma to marry him. Duke Richard was forced to recognize the new regime as his sister was again Queen.

Richard II commissioned Dudo of Saint-Quentin, his clerk and priest, to write about his ancestors. He was to tell the story of the Norman dukes in a way that showed their Christian morals. He wanted them shown to be good and upright leaders who built Normandy despite the bad behavior of their Frankish neighbors. It has been called by some historians a work of propaganda. While it contains a number of stories and legends, nowhere did Dudo claim the stories to be facts. When he wrote his work on the Customs and Deeds of the First Dukes of the Normans, Dudo seems to have met his goal "to tell in the noblest style the story of a noble destiny."

In 1025 and 1026 Richard confirmed gifts of his ancestor Rollo to Saint-Ouen at Rouen. He gave many other gifts to Monasteries. Their names show the areas over which Richard had ducal control: Caen, the Éverecin, the Cotentin, the Pays de Caux and Rouen. 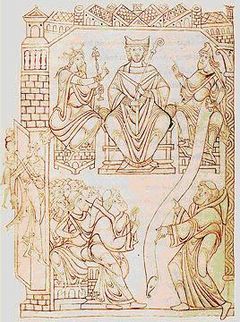 Richard II (right), with the Abbot of Mont Saint-Michel (middle) and Lothair of France (left)

Secondly he married Poppa of Envermeu. They had the following children:

All content from Kiddle encyclopedia articles (including the article images and facts) can be freely used under Attribution-ShareAlike license, unless stated otherwise. Cite this article:
Richard II, Duke of Normandy Facts for Kids. Kiddle Encyclopedia.