Robert Lawson (October 4, 1892 – May 27, 1957) was an American writer and illustrator of children's books. He won the Caldecott Medal for his illustrations in They Were Strong and Good in 1941 and the Newbery award for his short story for Rabbit Hill in 1945 .

Born in New York City, Lawson spent his early life in Montclair, New Jersey. Following high school, he studied art for three years under illustrator Howard Giles (an advocate of dynamic symmetry as conceived by Jay Hambidge) at the New York School of Fine and Applied Art (now Parsons School of Design), marrying fellow artist and illustrator Marie Abrams in 1922. His career as an illustrator began in 1914, when his illustration for a poem about the invasion of Belgium was published in Harper's Weekly. He went on to publish in other magazines, including the Ladies Home Journal, Everybody's Magazine, Century Magazine, Vogue, and Designer.

During World War I, Lawson was a member of the first U.S. Army camouflage unit (called the American Camouflage Corps), in connection with which he served in France with other artists, such as Barry Faulkner, Sherry Edmundson Fry, William Twigg-Smith and Kerr Eby (Behrens 2009). In his autobiography, Faulkner recalls that Lawson had a remarkable "sense of fantasy and humor", which made him especially valuable when the camoufleurs put on musical shows for the children of the French women who worked with them on camouflage (Faulkner 1957). 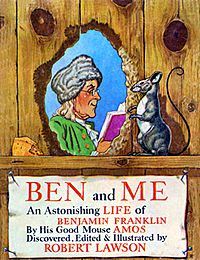 Lawson's cover for Ben and Me

After the war, Lawson resumed his work as an artist, and in 1922, illustrated his first children's book, The Wonderful Adventures of Little Prince Toofat. Subsequently, he illustrated dozens of children's books by other authors, including such well-known titles as The Story of Ferdinand (1936) by Munro Leaf and Mr. Popper's Penguins (1938) by Richard and Florence Atwater. In total, he illustrated as many as forty books by other authors and another seventeen books that he himself was the author of. These books included They Were Strong and Good (1940) (which won the Caldecott Medal in 1941), Ben and Me: An Astonishing Life of Benjamin Franklin By His Good Mouse Amos (1939) (which earned a Lewis Carroll Shelf Award in 1961), and Rabbit Hill (1944) (which won the Newbery Award in 1945).

Lawson was a witty and inventive author, and his children's fiction is also engaging for adults. One of his inventive themes was the idea of a person's life as seen through the eyes of a companion animal, an approach that he first realized in Ben and Me. Some of his later books employed the same device (which was compatible with his style of illustration) to other figures, such as Christopher Columbus (I Discover Columbus) and Paul Revere (Mr. Revere and I). Captain Kidd's Cat, which he both wrote and illustrated, is narrated by the feline in the title, named McDermot, who tells the story of the famous pirate's ill-starred voyage, in the process of which he is shown to have been a brave, upright, honest, hen-pecked man betrayed by his friends and calumniated by posterity. His artistic witticism and creativity can be seen in The Story of Ferdinand the Bull, where he illustrates a cork tree as a tree that bears corks as fruit, ready to be picked and placed into bottles.

In the early 1930s, Lawson became interested in etching. One of the resulting prints was awarded the John Taylor Arms Prize by the Society of American Etchers.

Lawson died in 1957 at his home in Westport, Connecticut, in a house that he referred to as Rabbit Hill, since it had been the setting for his book of the same name. He was 64. He is buried in Mountain Grove Cemetery, in Bridgeport, Connecticut. An annual conference is held in his honor in Westport.

The Robert Lawson Papers are in the University of Minnesota Children's Literature Research Collections.

The largest collection of Robert Lawson's art is at the Free Library of Philadelphia Rare Book Department.

All content from Kiddle encyclopedia articles (including the article images and facts) can be freely used under Attribution-ShareAlike license, unless stated otherwise. Cite this article:
Robert Lawson (author) Facts for Kids. Kiddle Encyclopedia.