Wilbur Monroe Leaf (a.k.a. Munro Leaf) (December 4, 1905 – December 21, 1976) was an American author of children's literature who wrote and illustrated nearly 40 books during his 40-year career. He is best known for The Story of Ferdinand (1936), a children's classic which he wrote on a yellow legal-length pad in less than an hour. Labeled as subversive, it stirred an international controversy.

Munroe Wilbur Leaf was born on 4 December 1905, the son of Charles W Leaf (1871-1965) and Emma India Leaf in Hamilton, Maryland. Leaf had an older sister, Elizabeth W Leaf. By 1910 his family lived in Washington, D.C. where his father had established his career as a machinist at the Government Printing Office. Leaf graduated from the University of Maryland in 1927 where he had played lacrosse and been class treasurer, and from Harvard University with a master's degree in English literature in 1931. He honeymooned with his wife Margaret Pope in Europe in 1928.

He taught secondary school English at the Belmont Hill School in 1929 and then worked as an editor with the publisher Frederick A. Stokes Company. Leaf once commented, "Early on in my writing career I realized that if one found some truths worth telling they should be told to the young in terms that were understandable to them." 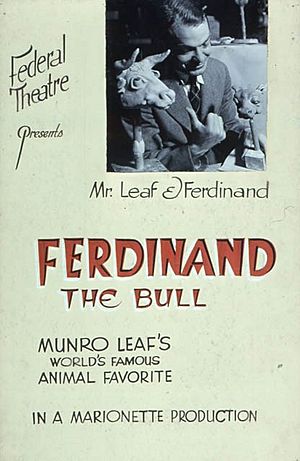 He wrote The Story of Ferdinand for his friend, illustrator Robert Lawson. The story, which follows a gentle bull in rural Spain who prefers smelling flowers to bullfighting, sparked considerable controversy because Ferdinand was regarded by some as a pacifist symbol. Banned in Spain and burned as propaganda in Nazi Germany, the book had over 60 foreign translations and has never gone out of print. The story was adapted into a Walt Disney film which won a 1938 Academy Award.

Leaf and Lawson's second collaboration, Wee Gillis, about a boy living in Scotland halfway between his father's family in the Highlands and his mother's in the Lowlands, was cited as a 1939 Caldecott Honor Book.

In the 1930s and 1940s Leaf wrote a regular feature for The American Magazine, titled "Streamlined Samples of the World's Best Stories," offering one-page, jocular, off-the-cuff condensations of Ivanhoe, Robinson Crusoe, Romeo and Juliet and others.

Leaf's other notable creation was the Watchbirds cartoon series, a cartoon commentary on human behavior. It ran as regular feature in the Ladies' Home Journal and was later collected into several books.

During the World War II, Leaf worked for the Army Department and after the war, he volunteered his skills to the State Department, insisting he was "anxious to work with the [Office of Public Affairs] (without compensation and in an unofficial capacity)...on international policy matters". This collaboration resulted in a cartoon book, published by the Committee for the Marshall Plan, titled Who Is the Man Against the Marshall Plan?, a Bibliography of Basic Official Documents.

During World War II, Leaf and Ted Geisel (a.k.a. Dr. Seuss) created the pamphlet, This Is Ann, about a mosquito spreading malaria to men who failed to take precautions.

Leaf went on to write 25 books after his service in World War II. Two of them were published posthumously.

Leaf died from cancer at age 71 in his home in suburban Garrett Park, Maryland on December 21, 1976.

Leaf's University of Maryland lacrosse stick was donated as the travelling trophy between Ann Arbor Pioneer and Ann Arbor Skyline high schools, to be possessed by the winner of each matchup between contests.

On April 22, 1995, Leaf was inducted into the University of Maryland Alumni Hall of Fame. Some of his books have been brought back into print in recent years.

The English composer Alan Ridout set The Story of Ferdinand to music. A version in French, released on Analekta (AN2 8741–2), is Solo by Angèle Dubeau, narrated by Pierre Lebeau.

In 1998, the Minnesota Orchestra commissioned Alice Gomez to write two works based on The Story of Ferdinand. Composed in a Spanish style, El Piquete de Abeja (the Bee Sting) and Habanera de Ferdinand make up the Ferdinand-inspired suite. These works were recorded in 2008 by the Michigan Philharmonic.

All content from Kiddle encyclopedia articles (including the article images and facts) can be freely used under Attribution-ShareAlike license, unless stated otherwise. Cite this article:
Munro Leaf Facts for Kids. Kiddle Encyclopedia.