Robin Cousins (born 17 August 1957) is a British former competitive figure skater. He is the 1980 Olympic champion, the 1980 European champion, a three-time World medalist (1978–1980) and four-time British national champion (1977–1980), obtaining all of these titles during his amateur career. He followed this with a successful career as a professional figure skater and later starred in ice shows as well as producing several of his own. He is able to spin in either direction, both clockwise and anti-clockwise, which is an unusual skill for a figure skater.

Off the ice, Cousins has commentated on figure skating events for the BBC, and he assumed the position of head judge on ITV's Dancing on Ice show from 2006 to 2014. He has also appeared in theatre productions, including in the West End.

Robin Cousins was born in Bristol to Jo, a secretary, and Fred, a civil servant, who was formerly a goalkeeper for Millwall. Cousins has two older brothers, Martin and Nick.

Cousins first stepped onto the ice at age nine at Westover Road Ice Rink while on holiday in Bournemouth. Having enjoyed the experience, he requested lessons for Christmas eighteen months later.

As a young skater, Cousins trained in ice dancing at the same time as singles. His first coach was a dancer called Ms Pamela Davies, and he was later coached by Carlo Fassi.

Cousins left school at the age of sixteen to focus on figure skating. After moving to London, he found a job stacking shelves at a department store. 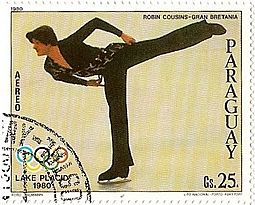 Robin Cousins on a 1980 Paraguay stamp

Cousins won his first national title in 1969 at the age of twelve at the 'novice' level. By the age of fourteen, he was Britain's junior champion, and he made his international debut that same year.

He reached the pinnacle of his amateur figure skating career by winning gold medals both in the European Championships and in the Winter Olympic Games in Lake Placid, New York, in 1980.

After turning professional in 1980, Cousins starred in various professional skating shows such as Holiday on Ice and Ice Capades, whilst continuing to be a regular competitor in the World Professional Championships. He hit both the longest axel jump and the longest back flip on figure skates in the Guinness Book of World Records, reaching 5.81 metres (19 ft 1 in) and 5.48 metres (18 ft) on 16 November 1983.

In 1983, Cousins formed his own ice skating performance company, which toured the world with professional ice shows Electric Ice and Ice Majesty. He has starred in, produced, directed, and/or choreographed many international TV ice shows, including The Nutcracker: A Fantasy on Ice, Sleeping Beauty on Ice, The Wizard of Oz on Ice, Toy Story on Ice, Andrew Lloyd Webber's Starlight Express on Ice, Holiday on Ice, and the movie The Cutting Edge.

Over several years, Cousins has been a regular guest presenter and commentator for BBC Sport, for the European and World Figure Skating Championships and the Winter Olympics. He appeared as the head judge on the show Dancing on Ice in each series from 2006 to 2014, but did not return to the show when it was revived in 2018.

Cousins has also performed on stage. He played the Prince in Rodgers and Hammerstein's Cinderella, Munkustrap in Cats, and Frank N Furter in The Rocky Horror Show in the West End. He has performed pantomime, playing Jack Frost in Santa Clause and the Return of Jack Frost at the Mayflower Theatre, Southampton. Prior to this he played the Prince in Snow White and the Seven Dwarfs at the Grand Opera House, Belfast.

Cousins has worked with the British synchronized swimming team.

In 2005, he was inducted into the World Figure Skating Hall of Fame.

In March 2016 Cousins joined the Art of the Olympians (AOTO) program.

Cousins has undergone a total of eight operations, including a knee replacement in his fifties. His problems began at the 1977 World Championships when his left knee cartilage ripped and locked in place. By 1980, he had undergone major surgery on both his left and right knees.

In December 1980, Cousins was the subject of This Is Your Life, after being surprised by Eamonn Andrews in his home city of Bristol.

Cousins is a significant patron of the Meningitis UK organization and the Starr Trust children's charity in Brighton.

All content from Kiddle encyclopedia articles (including the article images and facts) can be freely used under Attribution-ShareAlike license, unless stated otherwise. Cite this article:
Robin Cousins Facts for Kids. Kiddle Encyclopedia.