In Western Australia, regional parks consist of areas of land that have been identified as having outstanding conservation, landscape and recreation values. The park contains remnants of the once widespread Swan Coastal Plain and two threatened ecological communities, Thrombolites and Sedgelands. It provides evidence of the sea level changes over the past 7,000 years.

The concept of regional spaces in Western Australia open to the public was first proposed in 1955, when the Stephenson-Hepburn Report recommended preserving private land for future public use in what would become the Perth Metropolitan Region in 1963. The Environmental Protection Authority, EPA, identified areas of significant conservation, landscape and recreation value, in a report in 1983. In 1989, the Western Australian State Government allocated the responsibility of managing regional parks with the Department of Conservation and Land Management.

The park covers an area of 4,270 hectares and occupies approximately 16 percent of the area of the City of Rockingham. Most of the park is surrounded by commercial and residential land, only in the south does it border rural areas.

The park is non-continuous, with Cape Peron and Lake Richmond forming an isolated north-western block and Anstey and Paganoni Swamp a separate southern part. The Port Kennedy Scientific Park and Lark Hill block is separated from Lake Cooloongup, Lake Walyungup and Tamworth Hill by a major road- and rail corridor, while smaller roads still separate the other areas. 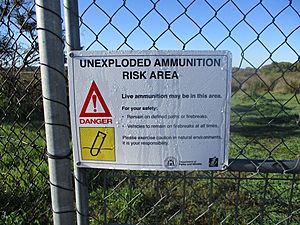 The Lake Cooloongup, Lake Walyungup, Port Kennedy Scientific Park and Lark Hill areas are potentially contaminated with Unexploded Ordnance, having been used as artillery range by the Department of Defence in the era around World War II.

All content from Kiddle encyclopedia articles (including the article images and facts) can be freely used under Attribution-ShareAlike license, unless stated otherwise. Cite this article:
Rockingham Lakes Regional Park Facts for Kids. Kiddle Encyclopedia.