Kids Encyclopedia Facts
In this article, the patronymic is Alexandrovich and the family name is Golovchenko. 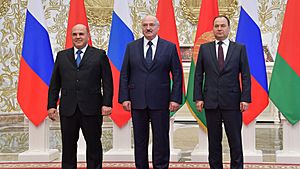 In 2013, he was made Ambassador to the United Arab Emirates, and was then also responsible for representing the country in Qatar, Kuwait, and Saudi Arabia. He was appointed to his current position by President Alexander Lukashenko two months prior to the 2020 Belarusian presidential election. Prior to his appointment, he served as the Chairman of the State Military-Industrial Committee. He offered his resignation amid a cabinet reshuffle on 17 August 2020, during the 2020 Belarusian protests. However, he was retained as Prime Minister of the new government.

He has a son from his first marriage and two daughters from his current marriage. His son Georgy Yatskovsky, is a student of the Bauman Moscow State Technical University. He is fluent in English, Arabic, German and Polish.

All content from Kiddle encyclopedia articles (including the article images and facts) can be freely used under Attribution-ShareAlike license, unless stated otherwise. Cite this article:
Roman Golovchenko Facts for Kids. Kiddle Encyclopedia.