Rossdale is a river valley neighbourhood in the city of Edmonton, Alberta, Canada, located immediately south of the downtown core. It is a popular residential neighbourhood with easy access to downtown, the University of Alberta, the Edmonton river valley park system, and other amenities.

A short distance to the west of the neighbourhood, along River Valley Road, are the Royal Glenora Club, the Golf Course, and the Skating Oval in Victoria Park.

The community is represented by the Rossdale Community League, established in 1922, which maintains a community hall located at 101 Street and 96 Avenue.

The site of the Rossdale powerplant was a First Nations campsite from the time that people first moved into the Edmonton area after the retreat of the glaciers around 8,000 years ago. In the early 1800s it was used as the site for the Hudson's Bay Company's Fort Edmonton and the North West Company's Fort Augustus, although this was only a theory until 2012 when a trench thought to be part of stockade wall was unearthed.

Human remains have been discovered at the site multiple times, by EPCOR workers and archaeologists, from at least the 1960s to 2010s. After a protest about the city's lack of consultation with the indigenous community, the provincial government directed the city to consult with the Papaschase band, other First Nations and the Métis Nation of Alberta. In 2005 and 2016, unearthed human remains were re-interred.

In 2007, a monument commonly known as the Rossdale Memorial was constructed to mark the desecrated burial ground.

RE/MAX Field, Edmonton's main baseball stadium, is located in this neighbourhood. The stadium hosts the Edmonton Riverhawks of the West Coast League as of the 2021 season. It was home to the Edmonton Prospects baseball team of the Western Canadian Baseball League from 2012-2020. The Edmonton Trappers of the AAA Pacific Coast League also called RE/MAX Field, then known as Telus Field, home up to the end of the 2004 season, when the franchise was moved to another city. 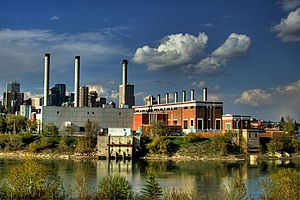 Located next to RE/MAX Field is the Rossdale Power Plant, used by EPCOR to generate electricity. Originally built by the Edmonton Electric Lighting and Power Company, the owner Alex Taylor, sold the company to the city of Edmonton in 1902. The plant was shut down by EPCOR in 2009. The plant sits on, and adjacent to, a native burial ground, and was named a provincial historic resource in 2001.

All content from Kiddle encyclopedia articles (including the article images and facts) can be freely used under Attribution-ShareAlike license, unless stated otherwise. Cite this article:
Rossdale, Edmonton Facts for Kids. Kiddle Encyclopedia.