The North Saskatchewan River valley parks system, also known as the Ribbon of Green or the River Valley Parks, is a continuous collection of urban parks around the North Saskatchewan River valley in the Edmonton Metropolitan Region of Alberta, Canada. The park system encompasses over 7,300 hectares (18,000 acres) of parkland, making it the largest contiguous area of urban parkland in the country. The park system is made up of over 30 provincial and municipal parks situated around the river from Devon to Fort Saskatchewan, with trails connecting most of the parks together.

Most of the river valley is grasslands, although sections of it are forested. The river valley supports a high level of biodiversity, and is used as a wildlife corridor for a variety of animals.

The location of the present post-glacial river valley was created as a result of ice marginal deposition.

Archaeological sites from around the area suggests that the First Nations have used the resources found in the North Saskatchewan River valley for thousands of years; and may have even modified the river valley to a certain degree. The vegetation found in the river valley changed dramatically from the late 1700s to the 1900s, partly owing to climatic change during the Little Ice Age. The introduction of non-native vegetation may be attributed to the arrival of Métis and European farmers; who also harvested trees for lumber, and used the valley as a grazing area for their livestock. 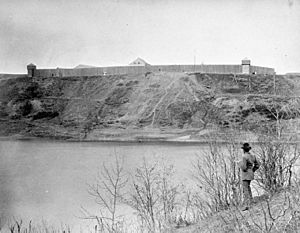 By the 1920s, the only developments in the river valley in Edmonton were dumps, golf courses, gravel pits, sewage plants, transportation corridors, and other low intensity developments like parks. The last coal mine in the river valley was closed in 1970. During the mid-20th century, proposals to use the river valley for a highway network were submitted, with work on the freeway beginning at MacKinnon Ravine Park. However, the plan to build the highway was abandoned by 1974 due to public opposition.

Formation of a park system 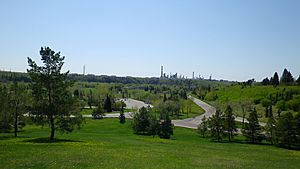 Shortly after the plans for the highway were abandoned in 1974, the provincial government created the Capital City Recreation Park, a park system that encompassed several river valley parks, including the Dawson, Gold Bar, Hermitage, and Rundle parks. During this period, small pieces of land were acquired to complete the trail system planned by the municipal and provincial government; connecting Hermitage Park and the High Level Bridge. The trail system was later extended to other parks in West Edmonton. In 1976, the provincial government also issued Orders-in-Council to restrict developments around the river valley from Devon to Fort Saskatchewan.

In 1985, the city of Edmonton approved the North Saskatchewan River Valley Area Redevelopment Act, offering the river valley parks some form of legal protection; and designating the area an environmental protection area to be used for urban parks.

A plan to unite the various parks that surrounded the North Saskatchewan River in the Edmonton Metropolitan Region was conceived during the early 1990s. In 1996, an ad hoc group of volunteers known as the River Valley Alliance (RVA) was formed from members of metropolitan area that the river passed through, including Devon, Edmonton, Fort Saskatchewan, Leduc County, Parkland County, Strathcona County, and Sturgeon County; with the aim to connect the riverside parks as a larger park system. The RVA itself was formally incorporated in 2003.

Along with the provincial and federal governments, the RVA led the development of several plans for the park, including a concept plan in 1998, a trail plan in 2000, an updated concept plan in 2003, and a plan of action in 2007. The latter plan being a C$605-million plan to develop a metropolitan park system. 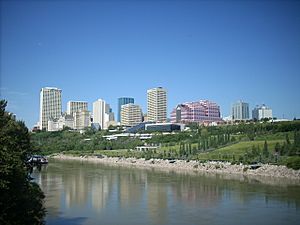 The North Saskatchewan River with downtown Edmonton in the background. The river cuts northeast through the city.

The North Saskatchewan River valley park system extends approximately 88 kilometres (55 mi) and encompasses over 7,300 hectares (18,000 acres) of land.. Most of the park system surrounds the North Saskatchewan River, a river that cuts northeast through the Edmonton Metropolitan Region, and through the centre of Edmonton. The course of the river has been modified during the early 20th century as a result of damming, and for transportation purposes. Dams have also been built into the river, with its waters still used for agricultural purposes. 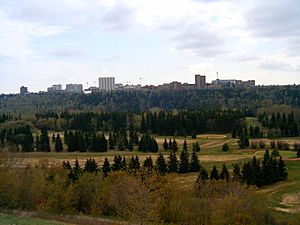 Although sections of the river valley are made up of public parks, portions of it are also held under private ownership. As of 2020, the RVA continues to pursue the acquisition of private land around the river valley in order to fulfill the vision of an uninterrupted, connected trail system. Private facilities located in the river valley include EPCOR Utilities' Gold Bar Wastewater Treatment Plant. Additionally there exist several thousand properties and residential homes that are situated within 50 metres (160 ft) of the river valley.

A number of public parks and golf courses are located in the river valley. In addition to its recreational uses, the river valley is also used to provide number of ecological services, including carbon sequestration, erosion control, and stormwater management. Taken together, it is estimated the river valley provides approximately CA$350 million to $650 million in services to the region per year.

The North Saskatchewan River Valley park system, including its associated ravines, hold over 30 urban parks forming a part of the larger park system. Collectively, these parks form the largest municipally-operated urban park and the largest contiguous area of urban parkland in the country. The river valley itself holds 3,556.4 hectares (8,788 acres) of dedicated parkland. 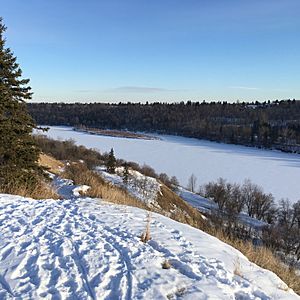 As of 2007, it was estimated that 10 million guests visit the river valley annually, making it the second most visited site in Alberta after the West Edmonton Mall. However, concerns were raised that higher visitation rates to the river valley, along with the continued urban developments within it, may cause disruption of local wildlife, and threaten the long-term health of the river valley. 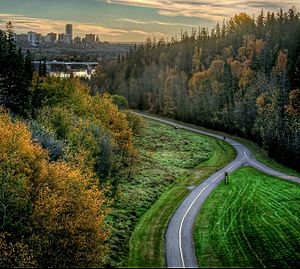 The river valley holds more than 160 kilometres (99 mi) of maintained trails that loosely connect the parks together. However, only 90.6 kilometres (56.3 mi) of the trails are paved. Portions of the network are disconnected, although the RVA plans to fully connect 75 kilometres (47 mi) of the trail system by 2024. An "overarching name" for the Regional Trail system was devised in 2020 between the RVA and the municipal governments. Several hectares of private land was also acquired by the municipal government in 2008 in order to "bridge the gaps" between the river valley's trail system.

The river itself is also viewed as a water trail for watercrafts, and serves as the binding feature of the park system. The river's flow rate varies between 160-250 m3/s in May to its peak flow of 250-500 m3/s during the summer; making its conditions unsuitable for swimming, although optimal for canoeing, kayaking, and rafting. The river flows across Alberta and Saskatchewan towards Lake Winnipeg and the Nelson River, and eventually into Hudson's Bay. 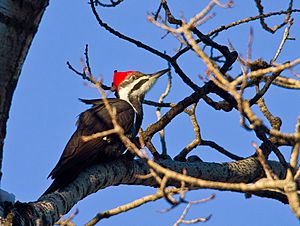 A pileated woodpecker in the North Saskatchewan River valley

All content from Kiddle encyclopedia articles (including the article images and facts) can be freely used under Attribution-ShareAlike license, unless stated otherwise. Cite this article:
North Saskatchewan River valley parks system Facts for Kids. Kiddle Encyclopedia.