The city is most well known for its proximity to petrochemical facilities, including Dow Chemical, Sherritt International, Agrium and Shell Canada. It is also known for its flock of 50 sheep that roam its downtown park throughout the summer months eating the grass. The city mascot is a sheep named Auggie.

In 1875, under the command of Inspector W.D. Jarvis, the North-West Mounted Police (NWMP) established Fort Saskatchewan as a fort on the North Saskatchewan River. The community was later incorporated as a village in 1899, a town in 1904, and a city in 1985. 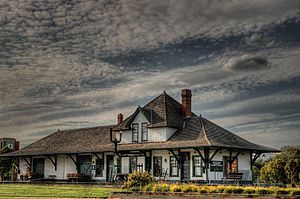 The Canadian Northern Railway reached Fort Saskatchewan in 1905, placing the town on a transcontinental rail line. The first bridge across the river was also built at this time, with the rail company paying for it in exchange for free land for its station in Fort Saskatchewan. Prior to the bridge, the only method to cross the river at Fort Saskatchewan was via ferry. In the decade after the railway arrived, the town's population nearly doubled to 993.

A new $200,000 provincial jail opened in 1915 at the end of what is now 100th Avenue to replace the 34-cell guard house that had been used to hold prisoners since the NWMP fort was constructed in 1875. The jail would see various additions throughout the next 70 years, including the construction of more cell blocks as well as a stand-alone power plant. By 1973, the jail employed 220 residents and housed both male and female offenders. The jail was replaced in 1988 when a new provincial correctional centre was built south of Highway 15 on 101st Street. The original jail cell blocks were subsequently demolished in 1994. Only one building from the complex, as well as the Warden's House, still stands today.

Since Fort Saskatchewan was incorporated as a town in 1904, it has had 29 residents serve as its mayor.

According to the 2006 census, the largest visible minorities in the community were Chinese with 95 residents followed by Filipino with 55 residents.

The centrepiece of Fort Saskatchewan's recreation and culture is the Dow Centennial Centre (DCC), a multi-use facility that includes an ice arena, gymnasium, fieldhouse, indoor track and fitness centre. The facility, which opened in September 2004, also features a 550-seat performing arts theatre, a permanent art gallery with monthly shows, a banquet hall and the local Pottery Guild.

The city also has two other indoor ice arenas   the Jubilee Recreation Centre and the Sportsplex   that are used during the winter months by hockey, ringette and figure skating associations. In the summer months, the lacrosse association uses them. Fort Saskatchewan also has the Harbour Pool, which is an indoor swimming pool that includes a hot tub, sauna and slide.

Over 30 km (19 mi) of paved trails meander through the city's dozen parks, including Legacy Park, which is the city's main gathering place and hosts festivals in the summer.

There is one nine-hole golf course located within the city's boundaries with three others nearby.

The Fort Saskatchewan Museum (c. 1909) is on the Canadian Register of Historic Places. The museum, which sits adjacent to Legacy Park along 101 Street, features a red brick courthouse, a historic school, church and house that were relocated to the site from their respective locations around the region. 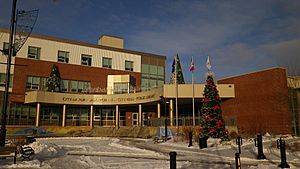 The Elk Island National Park, which is famous for its bison, is located southeast of the city.

All content from Kiddle encyclopedia articles (including the article images and facts) can be freely used under Attribution-ShareAlike license, unless stated otherwise. Cite this article:
Fort Saskatchewan Facts for Kids. Kiddle Encyclopedia.