Round Top Mountain facts for kids

Round Top Mountain is located in the Trans-Pecos region of West Texas, northeast from the Mexican border. The region is the most mountainous area of Texas, and lies to the southeast of the Sierra Blanca mountain range. The area includes the Finlay Mountains, Triple Hill, and Sierra Blanca quadrangles as well as parts of the Fort Quitman and McNary quadrangles. The Sierra Blanca area is approximately 950 square miles (2,500 km2). Round Top Mountain is one of five peaks made from laccoliths in the area, with the others being Little Round Top, Little Blanca, Triple Hill, and Sierra Blanca. The area lies between the northern Quitman Mountains and Devils Ridge.

The closest town to Round Top Mountain is Sierra Blanca, Texas, located 8 miles (13 km) southeast of the mountain with a population of approximately 553 people. It is accessible by Interstate 10 and approximately 85 miles (137 km) east of El Paso, Texas. 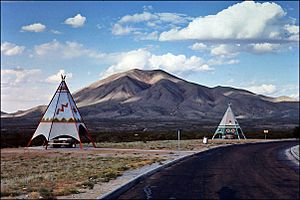 The Sierra Blanca area is on the northern margin of the Chihuahua Tectonic Belt and is a massive complex of volcanic rocks including pyroclastic materials, lava flows, and intrusions. Round Top Mountain is a surface-exposed rhyolite intrusion that was created from molten liquid rock pushing up from beneath the earth's surface. The top layer of sedimentary rock that makes up the mountain has been eroded over time, exposing the rhyolite formation. It also contains quantities of Del Rio Clay and Finlay limestone as well as deposits of uranium and lithium. The area contains scrub brush and grasses that are supported by the mountain's sandy loams and clay. 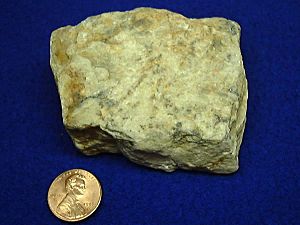 Berryllim ore, commonly found in Round Top with most concentrations on the northwest corner of the mountain 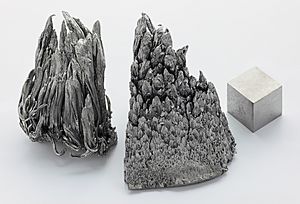 Yttrium, one of the rare-earth elements located in Round Top Mountain

The Round Top Project is a joint venture of USA Rare Earth and Texas Mineral Resources Corporation (TMRC; formerly Texas Rare Earth Resources). Round Top hosts 16 of the 17 rare earths, as well as industrial minerals including lithium, beryllium, and uranium. In addition to the rare earths and scandium, the Round Top project contains 11 of the 35 non-rare earth minerals deemed "critical to U.S. national security and the economy" by the U.S. Department of the Interior.

The Round Top Project began in the 1980s with the drilling of several locations in the mountain for fluoride and later beryllium. The project was originally for the exploration and development of beryllium and uranium, both of which are found in the mountain. Texas Rare Earth Resources picked up the project in 2011 with the re-logging and re-analyzing of the previous 82,000 feet (approximately 24,993 meters) of drilling. A 1990 study by the Texas Bureau of Geology estimated the rare-earth deposits in the mountain to be 1.6 billion metric tonnes. The Round Top Project plans to extract the heavy rare-earth elements through an open-pit mine, crushing the ore and using a heap leaching process to extract the elements. The project cost is approximately $290 million with an estimated $8 billion in projected revenue over 20 years of mining.

The heavy rare-earth elements are hosted in yttrofluorite which is soluble in dilute sulfuric acid, making heap leach extraction feasible. The natural porosity and permeability of the rhyolite provide the micro-conduits that allow the acid to penetrate to the interior of the large crush size (one inch, or 2.5 cm) for the heap leach. The even grade of heavy rare-earth mineralization throughout the deposit leads to a consistent, unchanging quality of raw material for the heap leach.

TMRC and its funding and development partner USA Rare Earth, LLC announced completion of an expanded and updated NI 43-101 Preliminary Economic Assessment (PEA) on the Round Top Project on August 20, 2019.

The PEA reports a Net Present Value (NPV) for the project of $1.56 Billion (at a 10% discount rate, pre-tax), an Internal Rate of Return (IRR) of 70%, and a Payback Period of 1.4 years.  Capital Cost for the project is $350.4 Million, including a complete on-site rare earth oxide and mineral separation plant, and includes a 25% contingency provision of $65.7 Million.

Ground water near Round Top Mountain is available through natural underground reservoirs. However, the water is too brackish and mineral-laden to be potable. The rainfall in the area comes primarily from thunderstorms during the months of July and August, with the months of January through April being mostly dry. Temperatures during the summer months reach 100 °F during the day with cooler temperatures at night. Due to the breezes in the higher parts of the mountain the actual temperature can vary considerably in the area. Round Top Mountain is a low impact for earthquakes with approximately one occurrence every 50 years.

All content from Kiddle encyclopedia articles (including the article images and facts) can be freely used under Attribution-ShareAlike license, unless stated otherwise. Cite this article:
Round Top Mountain Facts for Kids. Kiddle Encyclopedia.