Sierra Blanca is a census-designated place (CDP) in and the county seat of Hudspeth County, Texas, in the United States. The town is part of the Trans-Pecos region of far western Texas. The town is located northeast from the Mexican border and is located within the Mountain Time Zone. As of the 2010 census, the population was 553.

The town was founded in 1881 at the completion point of a long-sought southern transcontinental railway. Sierra Blanca has served as the junction of the Southern Pacific and Missouri Pacific railroads. Hudspeth County was formed in 1917 from El Paso County. Sierra Blanca was named the county seat, and has the only adobe courthouse in the state of Texas.

The town continues to accommodate travelers along interstate 10 between Van Horn and El Paso which is the main route that connects Texas from west to east. The town was named for the nearby Sierra Blanca Mountains, which was named for the white poppies which grew on it (sierra blanca is Spanish for white range).

The letters "SB" can be seen on a nearby mountain from Interstate 10. 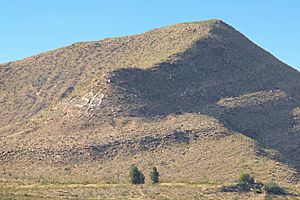 Summer days are hot with cool summer nights. The city occasionally experiences high winds and dust storms. June is regularly the warmest month with the highest recorded temperature in town was 109 °F (43 °C) in 1994. During the winter the jet stream will periodically dip far south and bring extremely low temperatures. December is usually the coolest month and the lowest temperature recorded was −10 °F (−23 °C) in 1985.

Normally, the city receives less than 1 inch (25 mm) of snow annually. During the hurricane season large tropical storms can sometimes bring large amounts of precipitation to the arid mountainous region and can cause flash flooding. The city on average has 293 sunny days and 43 days of precipitation. Rainfall is low; the town and vicinity receive an average of 11.27 inches (286 mm) of rainfall annually. 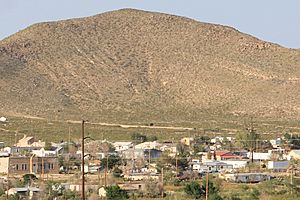 There were 172 households out of which 40.2% had children under the age of 18 living with them, 45.72% were married couples living together, 13.0% had a female householder with no husband present, and 31.0% were non-families. 28.3% of all households were made up of individuals and 11.4% had someone living alone who was 65 years of age or older. The average household size was 2.63 and the average family size was 3.31.

All content from Kiddle encyclopedia articles (including the article images and facts) can be freely used under Attribution-ShareAlike license, unless stated otherwise. Cite this article:
Sierra Blanca, Texas Facts for Kids. Kiddle Encyclopedia.